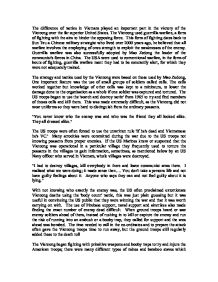 The difference of tactics in Vietnam played an important part in the victory of the Vietcong over the far superior United States.

The difference of tactics in Vietnam played an important part in the victory of the Vietcong over the far superior United States. The Vietcong used guerrilla warfare, a form of fighting with the aim to hinder the opposing force. This form of fighting dates back to Sun Tzu a Chinese military strategist who lived over 2000 years ago, he believed that all warfare involves the employing of ones strength to exploit the weaknesses of the enemy. Guerrilla warfare was also successfully adopted by Mao Zedong the leader of the communist's forces in China. The USA were used to conventional warfare, in the form of bouts of fighting, guerrilla warfare ment they had to be constantly alert, for which they were not adequately trained. The strategy and tactics used by the Vietcong were based on those used by Mao Zedong, One important feature was the use of small groups of soldiers called cells. The cells worked together but knowledge of other cells was kept to a minimum, to lower the damage done to the organisation as a whole if one soldier was captured and tortured. The US troops began to use the 'search and destroy tactic' from 1965 to try and find members of theses cells and kill them. ...read more.

Vietcong began fighting with primitive weapons and booby traps to try and injure the American troops; there were many different types of mines and bamboo staves which they used, one of the most feared was the 'Bouncing Betty'. These traps killed inexperienced soldiers and put the rest of the troops on edge. The Vietcong's considerable knowledge of the local environment also proved to be extremely useful in the war. They could successfully launch ambushes against small groups of American troops, which again proved to be extremely effective in putting the Americans on edge, every time they were in Vietnam. The Vietcong were told not to into combat unless it outnumbered the enemy and was certain of winning. It therefore concentrated its attacks on poorly guarded government positions theses were referred to as 'soft targets'; it often used night attacks to increase the possibility of success. The Vietcong began to collect more and more advanced weapons from the Americans, survey taken by the US army discovered that about 90% of Vietcong weapons captured once belonged to the Americans or ARVN. On the other hand, the US fought from the beginning with some of the most advanced weapons in the world. ...read more.

Other chemicals used destroyed crops with the aim of starving the Vietcong, but it was later discovered that the poor crops affected the poor peasants far more, this again made the USA unpopular. The USA believed that with all this modern technology they could not be defeated by a "Raggedy a*s 4th rate country" But the Vietcong had many advantages, another of these was the easy movement they had from North Vietnam to and throughout South Vietnam, this was as a result of the Ho Chi Minh trail. This was a complex web of jungle paths with base camps at regular intervals along it, it let soldiers travel from North Vietnam to Saigon in six weeks, it is estimated that the Vietcong received sixty tons of aid per day from the Ho Chi Minh trail. The USA quickly saw the superiority this gave the Vietcong and tried to stop its use. As the trail could not be seen by air it could not be successfully bombed, so the US decided to build the 'McNamara Line', a large barrier of barbed wire and minefield that crossed South Vietnam. Due to repeated attacks by enemy forces during its construction the plan was abandoned in 1967, the Vietcong was left with its advantage of quick supplies from North Vietnam. Another advantage of the Vietcong was its many elaborate Tunnel complexes throughout South Vietnam. ...read more.