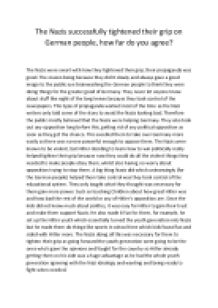 The Nazis successfully tightened their grip on the German people, how far do you agree?

ï»¿The Nazis successfully tightened their grip on German people, how far do you agree? The Nazis were smart with how they tightened their grip, their propaganda was good. The reason being because they did it slowly and always gave a good image to the public eye brainwashing the German people to think they were doing things for the greater good of Germany. They never let anyone know about stuff like night of the long knives because they took control of the newspapers. This type of propaganda worked most of the time as the n**i writers only told some of the story to avoid the Nazis looking bad. Therefore the public mostly believed that the Nazis were helping Germany. They also took out any opposition long before this, getting rid of any political opposition as soon as they got the chance. ...read more.

He also made it fun for them, for example, he set up the Hitler youth which essentially turned the youth generation into Nazis but he made them do things like sports in school time which kids found fun and sided with Hitler more. The Nazis doing all this was necessary for them to tighten their grip as going forward the youth generation were going to be the ones whoâ€™s gave the opinions and fought for the country so Hitler already getting them on his side was a huge advantage as he had the whole youth generation agreeing with the n**i ideology and wanting and being ready to fight when needed. Instead of trying to win their hearts, Hitler used terror for those who opposed. Therefore, many people feared the Nazis and especially feared what would happen if they went against the Nazis because of the Gestapo. ...read more.

Stuff like this was happening beforehand as well such as people talking about how they got tortured leading to many people not liking the Nazis. That therefore led to many people starting to resist the Nazis and not like their ideology. A big factor creating hate for the Nazis were their racial and religious views. They didnâ€™t care much about religion and for that reason, they restricted religious rights. This caused many religions mainly Catholics and Protestants to go against the Nazis and protest against them. Overall I think that the Nazis were not very successful in tightening their grip on the German people as although they used propaganda to get many on their side, They also used a lot of terror which actually increased peoples hatred for them. Also differentiating people racially and restricting religious rights caused more hatred and less loyalty causing the Nazis to gain many traitors and people ready to go against them when they had the chance ...read more.