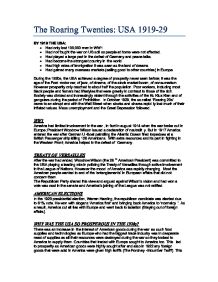 The Roaring Twenties: USA 1919-29 BY 1919 THE USA: * Had only lost 100,000 men in WW1 * Had not fought the war on US soil so people at home were not affected. * Had played a large part in the defeat of Germany and peace talks * Had become the strongest country in the world * Had high rates of immigration it was seen as the land of dreams * Had gained many overseas markets (selling good to other countries) in Europe. During the 1920s, the USA achieved a degree of prosperity never seen before; it was the age of the Ford motor car, of jazz, of cinema, of the stock market boom, of consumerism. However prosperity only reached to about half the population. Poor workers, including most black people and famers had lifestyles that were greatly in contrast to those of the rich. Society was divided and increasingly violent through the activities of the Ku Klux Klan and of gangsters during the period of Prohibition. In October 1929, the so called 'Roaring 20s' came to an abrupt end with the Wall Street when stocks and shares rapidly lost much of their inflated values. Mass unemployment and the Great Depression followed. WW1 America had limited involvement in the war, in fact in august 1914 when the war broke out in Europe; President Woodrow Wilson issued a declaration of neutrality. But in 1917 America entered the war after German U-Boat patrolling the Atlantic Ocean fired torpedoes at a British Passenger ship killing 128 Americans. With extra resources and its part in fighting in the Western Front; America helped in the defeat of Germany. TREATY OF VERSAILLES After the war had ended, Woodrow Wilson (the 28th American President) was committed to the USA playing a leading role in policing the Treaty of Versailles through active involvement in the League of Nations. However the mood of America was rapidly changing. ...read more.

* Improved machinery so less men were needed (led to mass unemployment) * Machinery led to overproduction and with the high tariffs on US products imposed in by trading nations it was harder to sell surplus. * All this led to farmers becoming very poor In the 1920s 6 million rural Americans were forced out of their land due to poverty. This meant that many had to migrate to neighbouring states where there was little demand for their farm labour. Famers were badly affected as factories such as rayon factories were making all the money opposed to cotton farmers and farmers had sell their land as they had no other option. Farming prices generally went down, e.g. wheat in 1919 cost $2.10 whereas in 1929 it cost $1.05 per pound. WORKERS IN OLD FACTORIES These workers did not benefit from the boom as they suffered from foreign completion, new industries like opposed to oil for electricity. Many factories also could not compete with cheap labour the newer factories had. There was a strike amongst older factories in 1928 as male workers earned $18 and women earned half that in a week while at the time $48 dollars per week was considered the minimum wage for a decent standard of living. POOR AND UNEMPLOYED During the 1920s, 42% of Americans were under the poverty line. Unemployment was major as 5% were unemployed at the peak of the boom and with the large amount of goods available with less people buying them; this meant that goods had to be sold cheaper in a bid to get more people to buy goods. As less people demanded goods because of poverty, it was not good for the cycle of prosperity as it leads it to come to a halt. IMMIGRANTS Before 1919, the USA had an open door policy of immigration which allowed any immigrant to enter the USA and live here, many immigrants were Europeans escaping the war and many viewed America as the land of dreams. ...read more.

Hoover had promised a continuation of the boom - 'a chicken in every pot' and boasted that, 'We in America today are nearer to the final triumph over poverty than ever before. The poor man is vanishing from among us.' Within six months the situation was totally different. In June 1929, the effects of overproduction were felt as some industries cut back on production. In September, some investors began to worry about prices and warned that a crash would happen at some time. This led to some people selling their shares, but during September the stock market recovered. The banks helped to restore stability by buying up vast numbers of shares. Share prices plummeted However, in late October panic set in and, on 24 October, 13 million shares were sold on the Wall Street Stock Exchange in New York. The banks could no longer intervene by buying on this huge scale. In succeeding days, not only were millions of shares sold, but their prices plummeted as well. No one wanted to buy. By 29 October, investors sold their shares for whatever they could get. The effects were dramatic: * Big investors lost heavily. The Vanderbilt family lost $40 million. * Smaller investors had often borrowed money from banks with their homes as security. Banks could now repossess their homes and evict those living there. * Some investors committed suicide. * Over 100,000 companies went bankrupt in the period 1929-33. * Many banks went out of business as they could not repay their investors. * Unemployment rose to 12 million by 1932. Many homeless built temporary shelters in parks. These 'homes' acquired the nickname of Hoovervilles. The Republican government under Herbert Hoover was taken by surprise. Hoover assumed at first that prosperity would soon return -'Prosperity is just around the corner'. But then he was forced to try to help the economy by cutting taxes, for example, and by providing soup kitchens for the unemployed and homeless. The Great Depression set in and became worse in 1931 and 1932. ...read more.