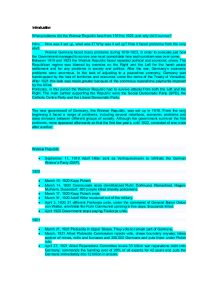 What problems did the Weimar Republic face from 1919 to 1923, and why did it survive?

Introduction What problems did the Weimar Republic face from 1919 to 1923, and why did it survive? Intro- How was it set up, what was it? Why was it set up? How it faced problems from the very start. Weimar Germany faced many problems during 1919-1923, in order to evaluate just how the Government managed to survive one must consolidate how each problem was over come. Between 1919 and 1923 the Weimar Republic faced repeated political and economic crises. The Republican regime was blamed by enemies on the Right and the Left for the harsh peace settlement and for any problems in society and politics. After the war, Germany's economic problems were enormous. In the task of adjusting to a peacetime economy, Germany was handicapped by the loss of territories and resources under the terms of the Treaty of Versailles. After 1921 this task was made greater because of the enormous reparations payments imposed by the Allies. Politically, in this period the Weimar Republic had to survive attacks from both the Left and the Right. The main parties supporting the Republic were the Social Democratic Party (SPD), the Catholic Centre Party and the Liberal Democratic Party. The new government of Germany, the Weimar Republic, was set up in 1919. From the very beginning it faced a range of problems, including several rebellions, economic problems and deep divisions between different groups of society. Although the government survived the first problems, more appeared afterwards so that the first few years, until 1923, consisted of one crisis after another. Weimar Republic * September 11, 1919 Adolf Hitler sent as Vertrauensmann to infiltrate the German Worker's Party (DAP). 1920 * March 13, 1920 Kapp Putsch * March 14, 1920 Communists seize demilitarized Ruhr; Dortmund, Remschied, Hagen, Mulheim, Dusseldorf; 300 people killed (mostly policemen). * March 17, 1920 Kapp Putsch ends. * March 31, 1920 Adolf Hitler mustered out of the military. ...read more.

The city of Berlin was paralysed and Kapp was forced to resign within within a week. The leaders of the Kapp putsch however, were barely punished because of right wing sympathies in government and the judiciary. No action was taken against Von Seeckt (he was in fact promoted), nor any attempt made to reform the Reichswehr, which developed the idea that it was independent of government or civilian control. This contrasted sharply with the way left wing activists were treated. The failure of the Kapp Putsch showed that Germany at this time did not want a military a right wing government. Not only did the workers oppose it, but so did the middle classes. The Putsch also showed that the time was not ripe for the left wing. The Independent Socialists tried to continue the general strike, but failed to do so. In 1921 right wing assassins murdered Matthias Erzberger, (Germany's representative to the Reparations Commission) because he had signed the Treaty of Versailles. In 1922 the same group murdered Walter Rathenau the Foreign Minister, because he argued that Germany should fulfil its obligations under the peace treaty and probably because he was a Jew. It has been estimated that between 1919-22 there were 376 political murders in Germany; 356 of which were attributed to right wing extremists. While 17 left wing assassins were rigorously punished, 10 with the death penalty, only one right wing assassin was severely punished, but not with the death penalty. Average prison sentences were 15 years for the Left; only 4 months for the Right. In November 1923 Hitler and some n**i followers tried to seize power in the so-called 'Beerhall Putsch' in Bavaria. The uprising was put down by troops. Hitler and his associates were arrested, but once again the prison sentences were short. Hitler now decided not to try a putsch again, but to come to power legally. ...read more.

Conclusion: Over all survival The Weimar Republic, in spite of all its problems, did survive the crisis that had befallen it between 1919 and 1923; even though it had inspired violent political opposition from right and left wing groups, it had faced a devastating economic situation creating a high level of discontent within society, and had brought about serious political humiliation upon itself, it had still managed to survive. All these problems contributed to the political difficulties which Weimar faced during its first few years; a general hatred amongst Germans of the new system and constant opposition towards it. The political issue of the Treaty of Versailles was probably the most important individual cause of Weimar's crisis however. It had been the Treaty of Versailles that caused nationalist opposition to Weimar and the German nation to step down to a second class power, losing much of its territory, having extreme military restrictions imposed on it, and it had been the treaty of Versailles that had brought about reparations, leading Germany into an extremely difficult economic situation causing further social tensions, and it had been this treaty that had inspired communist opposition by bringing about the need to get Germany back to work, causing the SPD to cooperate with the old order. It can be argued that this treaty was responsible for most of the hatred of the German people towards Weimar between 1919 and 1923, but on the other hand, Germany would not have been able to negotiate peace had they not signed the treaty. It seems amazing that the Weimar republic could survive so many problems. The government faced challenges from left and right wing groups not just in 1919 and 1920 but right up to 1923. Meanwhile, the economic problems, which were bad in 1919, seemed to get worse during this period until there was a crisis in 1923. These economic problems also made the social problems worse. Out of them all, the economic problems were probably the worst and without them there would probably have been fewer social problems and less opposition to the government. ...read more.