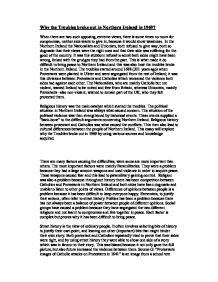 Why the Troubles broke out in Northern Ireland in 1969.

Why the Troubles broke out in Northern Ireland in 1969? When there are two such opposing, extreme views, there is some times no room for compromise, neither side wants to give in, because it would show weakness. In the Northern Ireland the Nationalists and Unionists, both refused to give way, both so dogmatic that their views were the right ones and that their side was suffering for the good of the country. It was this stubborn refusal to admit both sides might have been wrong, linked with the grudges they had from the past. This is what made it do difficult to bring peace to Northern Ireland and this was also how the troubles broke in the Northern Ireland. The troubles started around 1688 (321 years ago) when Protestants were planted in Ulster and were segregated from the rest of Ireland; it was this divisions between Protestants and Catholics which worsened the violence both sides had against each other. ...read more.

It seems that the Catholics are trying to make the Protestants more barbaric, more like the Irish " now are ye wild Irish as well as we." There is a large variety of social, political and religious reasons why it has been hard to obtain peace in Northern Ireland; there have also been many events that occurred in Northern Ireland that seriously hindered peace progress talks. These are four events that seriously effect peace in Northern Ireland right up to the current day, the Civil Rights Movement, b****y Sunday, Hunger Strikes and Peace Movements. All these events will be described in my piece of work, I will identify why they happened and who was involved. I will also explain how a power sharing agreement took so long to be put into place because of the impact these events had on the prejudice between Catholic Nationalists and Protestant Unionists. The Civil Rights Movement was a series of Nationalist Catholic marches held between 1967 and 1972 in ...read more.