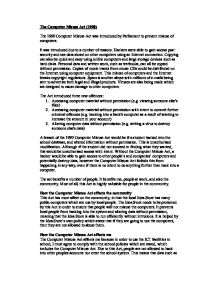 The Computer Misuse Act (1990) The 1990 Computer Misuse Act was introduced by Parliament to prevent misuse of computers. It was introduced due to a number of reasons. Hackers were able to gain access past security and see data stored on other computers using an Internet connection. Copying can also be quick and easy using online computers and large storage devices such as hard disks. Personal data and written work, such as textbooks, can all be copied without permission. Copies of music tracks from music CDs could be distributed on the Internet using computer equipment. This misuse of computers and the Internet breaks copyright regulations. Spam is another abuse with millions of e-mails being sent to advertise both legal and illegal products. Viruses are also being made which are designed to cause damage to other computers. The Act introduced three new offences: 1. ...read more.

Evaluation The Computer Misuse Act is highly useful in ensuring that peoples work and personal information is kept safe. However it can be difficult in finding a person to prosecute if the Act is breached due to the enormity of the Internet. For example, if someone hacked into someone else's computer and looked at or altered information, then they would be charged with unauthorised access or modification. However it can be hard to trace the hacker as they may not use their own IP address. Also if someone was attempting to access data without authorisation, then it would be difficult to prove this as the crime has not yet been committed. I hope that in future, the government will implement new plans which will be able to reduce the activity of these happenings. Much money is lost by businesses by this law, and can be prevented by simple measures. It will serve as a further warning not to disobey this law. ...read more.