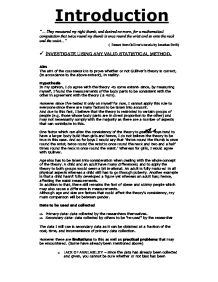 “… They measured my right thumb, and desired no more; for a mathematical computation that twice round my thumb is once round the wrist and so onto the neck and the waist…”

The aim of the coursework is to prove whether or not Gulliver’s theory is correct, (in accordance to the above extract), in reality.

However since I’ve tested it only on myself for now, I cannot apply this rule to everyone since there are many factors to be taken into account.
And due to this fact, I believe that the theory is restricted to certain groups of people (e.g. those whose body parts are in direct proportion to the other) and may not necessarily comply with the majority as there are a number of aspects that can contribute to this.

One factor which can alter the consistency of the theory is gender. Boys tend to have a larger body build than girls and hence, I do not believe the theory to be true in this case.

Unfortunately year 4 girls are a total of 10 girls and so I will not be able to carry out my sampling method on them since my sampling size is originally 10 from each class anyways. The same situation has risen in year 4 and 11 boys.

Using this procedure each element in the population has a known and
equal probability of selection.

The median {for the cumulative frequency diagram} will be calculated as:

The mean {for the histogram} will be calculated using the following formula:

Plan
To see whether or not the theory is true.