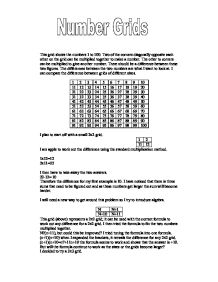 This grid shows the numbers 1 to 100. Two of the corners diagonally opposite each other on the grid can be multiplied together to make a number. The other to corners can be multiplied to give another number. There should be a difference between these two figures. The differences between the two numbers are what I want to look at. I can compare the difference between grids of different sizes.

I plan to start off with a small 2x2 grid.

I am apple to work out the difference using the standard multiplication method.

I then have to take away the two answers.

Therefore the difference for my first example is 10. I have noticed that there is three sums that need to be figured out and as these numbers get larger the sum will become harder.

I will need a new way to get around this problem so I try to introduce algebra.

This grid (above) represents a 2x2 grid; it can be used with the correct formula to work out any difference for a 2x2 grid. I then tried the formula to fin the two numbers multiplied together.

N?(n+11), but could this be improved? I tried tuning the formula into one formula.

On the table Above the first column represents the grid size, the second is the length of sizes multiplied together, and the third shows the difference of the grid divided by 10,(unlined figures are predicted). There is an interesting link between the second and third columns, as the result of the numbers multiplied column equals the differences.

As I have not done the 5x5 grid, the table predicts that the difference will be 16 by multiplying this number by 10 I got 160.

Using the formula I can easily find out the difference-

However there is an easier way to gather information, by using a different formula that eliminates the making of an algebra grid. The formula is:

Let’s test the formula on a 7x7 grid.

It claims that 360 is the correct answer this is also correct by the table I have done earlier but to make sure I am going to test it using the algebra equation.

So the formula proves that the smaller formula works and it shows the answer is 360. I now want to see if the formulas are able to work with a different shape like a rectangle.

These are both rectangles but I am going to

start by looking at regular pattern of rectangle size.

I am going to start with a 2x3 grid. I’m going to use the standard method first to find the difference.

33-11-22 this says the difference is 22 but will the formula work with it? The smaller 10(n-1) will not work as it does not take into account the two different lengths of the sides. However the larger formula will work.

So I am able to use this method to find out the new formula.

I am now going to try my formula on a 3x4 grid. This is to make sure that the formula still works on a larger scaled grid.

Now I’m going to use the formula again:

Below is a 3x7 grid, I am going to see if the formula is able to find a difference.

The formula claims that 120 is the difference but would the conventional methods agree?

It is confirmed now that we have the formula for any shaped rectangle in a 10x10 grid. But so far all of the formulas have been for 10x10 grids. This is mad apparent by the number 10 recurring in them.

Through out my work I have found three main formulas.

With the third of these three formulas it is possible to work out the difference on any sized square or rectangle in any sized grid. In a way, it is the concluding formula. With out moving into different or three dimensional shapes.