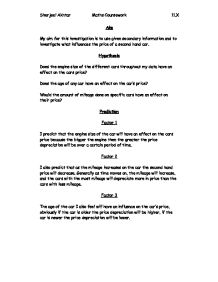 Use given secondary information to investigate what influences the price of a second hand car.

My aim for this investigation is to use given secondary information and to investigate what influences the price of a second hand car.

Does the engine size of the different cars throughout my data have an effect on the cars price?

Does the age of any car have an effect on the car’s price?

Would the amount of mileage done on specific cars have an effect on their price?

I predict that the engine size of the car will have an effect on the cars price because the bigger the engine then the greater the price depreciation will be over a certain period of time.

I also predict that as the mileage increases on the car the second hand price will decrease.

Using calculator you can generate random numbers by pressing:

This will generate random numbers between 1 to a 100.

Stratified sampling is when generally when data is grouped for a certain factor.

The amount of groups that the data have to be put into is also an issue. Fewer groups may cause the data calculation to be difficult and in some cases the calculations may become in-accurate.

I will also be looking to make several different calculations. Some of the calculations I may decide to make are:

Finally a conclusion will be made to comment on my data and graphs, and comments will be made to explain if y hypothesis was correct or incorrect. Also I will explain any mistakes I had made throughout this investigation and comment on how I improved it or corrected it.  And then finally I’ll sum up the main aim of this task and answer the main question, “what influences the price of a car?”