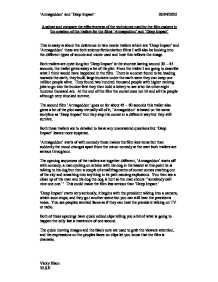 Analyse and compare the effectiveness of the techniques used by the film makers in the creation of the trailers for the films 'Armageddon' and 'Deep Impact'.

Analyse and compare the effectiveness of the techniques used by the film makers in the creation of the trailers for the films 'Armageddon' and 'Deep Impact' This is essay is about the deference in two movie trailers which are 'Deep Impact' and 'Armageddon' these are both science fiction/action films I will also be looking into the different types of sounds and music used and how this reflects the image. Both trailers are quite long but 'Deep Impact' is the shortest lasting around 30 - 45 seconds, the trailer gives away a lot of the plot. From the trailer I am going to describe what I think would have happened in the film. There is a comet found to be heading towards the earth, they build large bunkers under the earth were they can keep one million people alive. They found two hundred thousand people with higher ranking jobs to go into the bunker first they then hold a lottery to see who the other eight hundred thousand are. ...read more.

This could make the film less serious than 'Deep Impact.' 'Deep Impact' starts very seriously, it begins with the president talking into a camera, which soon stops, and they go t another scene but you can still hear the presidents voice. You see peoples worried faces as if they can hear the president talking on TV or radio. Both of these openings have quick edited clips telling you a bit of what is going to happen the only last a maximum of one second. The quick moving images and the black outs are used to grab the viewers attention, and the expressions on the peoples faces on clips let you know that the film is dramatic. The opening sequence for 'Armageddon' is the most effective because of the comedy factor. They also keep cutting to a picture of a digital clock giving you the feel of tension and a race against time. They use natural light to highlight the tall buildings giving you a feel of height and what could be destroyed it also draws your attention to focus on the sky were the comets would be falling from so you always have that sense of danger throughout the trailers. ...read more.

The voice over creates suspense and tension by the voices used, which are usually deep male voices. 'Armageddon's voice over is supplied by someone who is not in the actual film itself but is employed solely for this purpose. Whilst 'Deep Impact's voice over is supplied by the president after the trailer begins. Both trailers use dark music, which creates tension and it parallel with the films themselves. The music stays generally the sane the whole way through. Film trailers are very important to the successfulness of the film they most be shown when there is a peak time when people will be viewing the TV and not after a program when they could walk off. The trailer is also important because people watch trailers and say 'I want to see that' and if no one knows what a film is about he or she are not going to go and see it. The most effective trailer is 'Deep Impact' because 'Armageddon' gives away too much of the plot meaning you don't really have to go and see the film to know exactly what happens. 'Armageddon' and 'Deep Impact' 03/04/2003 Vicky Elson 10.S.E ...read more.