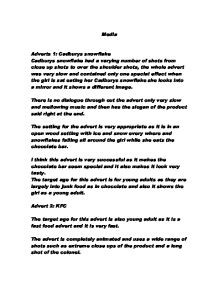 Media Adverts 1: Cadburys snowflake Cadburys snowflake had a varying number of shots from close up shots to over the shoulder shots, the whole advert was very slow and contained only one special effect when the girl is sat eating her Cadburys snowflake she looks into a mirror and it shows a different image. There is no dialogue through out the advert only very slow and mellowing music and then has the slogan of the product said right at the end. The setting for the advert is very appropriate as it is in an open wood setting with ice and snow every where and snowflakes falling all around the girl while she eats the chocolate bar. I think this advert is very successful as it makes the chocolate bar seem special and it also makes it look very tasty. The target age for this advert is for young adults as they are largely into junk food as in chocolate and also it shows the girl as a young adult. ...read more.

The advert starts off slowly but speeds up as the strawberry gets tied to the aeroplane, there isn't much dialogue only quick comments from the characters. The advert music is mostly just background lively and childish music. I believe the advert to be successful as the children think it looks really nice and tasty and the parents think it looks good as they will be getting fruit where as the product is mostly made out of sugar. Advert 4: Aero, all bubble and no squeak The target audience of the product is young adults and older adults as the main character of the advert is and adult male buying an Aero from a newspaper stand. Most of the shots are either close up and medium shots on the man or close up shots on the dancing mouse. The pace of the advert is quite slow but picks up a bit when the mouse starts dancing. This is the part of the advert where the computer animation comes in and the mouse dances and uses a hula-hoop. ...read more.

The advert isn't that clear what it is trying to promote at first but as the dinosaur starts to go he eats Chewits on his way down the hill. Advert 6: Sainsburys The target audience is for adults who do the shopping and who want something different or specific The camera has many varying shots following the actor as he walks around the shop getting his shopping. The dialogue is quite a main part of the advert as it is a conversation between two people on what to buy and how to cook it. The music doesn't play much of a part in the advert it is basically just background. Jamie Oliver appears in the advert he is a very famous chef and is in all of the sainsburys adverts and is well connected with sainsburys, and so it was easy to know that the advert was promoting sainsburys. The advert is quite successful but as I am not the target age and because I don't do the shopping this advert doesn't appeal to me all that much but it may do to other people. ...read more.