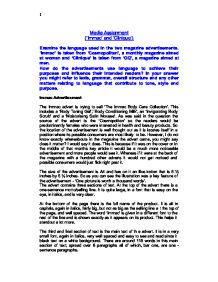 Media Assignment ('Immac' and 'Clinique') Examine the language used in the two magazine advertisements. 'Immac' is taken from 'Cosmopolitan', a monthly magazine aimed at woman and 'Clinique' is taken from 'GQ', a magazine aimed at men. How do the advertisements use language to achieve their purposes and influence their intended readers? In your answer you might refer to lexis, grammar, overall structure and any other matters relating to language that contribute to tone, style and purpose. Immac Advertisement The Immac advert is trying to sell 'The Immac Body Care Collection'. This includes a 'Body Toning Gel',' Body Conditioning Milk', an 'Invigorating Body Scrub' and a 'Moisturising Satin Mousse'. As was said in the question the source of the advert is the 'Cosmopolitan' so the readers would be predominantly females who were interested in health and beauty products. So the location of the advertisement is well thought out as it is locates itself in a position where its possible consumers are most likely to be. However, I do not know exactly whereabouts in the magazine the advert came, you might say does it matter? I would say it does. This is because if it was on the cover or in the middle of that months key article it would be a much more noticeable advertisement and more people would see it. Whereas if it were at the back of the magazine with a hundred other adverts it would not get noticed and possible consumers would just flick right past it. The size of the advertisement is A4 and has on it an illustration that is 8 1/2 inches by 5 1/2 inches. So as you can see the illustration was a key feature of the advertisement - 'One picture is worth a thousand words'. The advert contains three sections of text. At the top of the advert there is a one-sentence motto/selling line. It is quite large, in a font that is easy on the eye, in italics, and is very clear. ...read more.

The advert uses a clever syllable pattern to persuade its readers; most words are monosyllabic apart from the product and the adjectives describing the product. This causes emphasis to be placed on the product, which is of course what the advert is there to do. The mood of this advert is soft and soothing and this is shown in the font that is used in the advert. It uses its language to try and gently seduce into buying the product. Its sentences are mainly statements, but having said that the top selling line 'Now you can care for your body as much as you care for your face' is a type of command. This is used because often women can be vain and do care a lot about their facial appearance and so the top command plays on this and tries to relate to the women that might buy this product. There is also a question right at the end that is trying to put that final bit of influence in before the advert finishes it uses a pun on complexion and a rhetorical question to leave it up to you. Almost as if to say 'you've read the advert and now its up to you'. The main line of appeal in this advert would have to be the picture as it is the main thing that attracts your attention. Even though the text sells the product it is clear that without the picture you would not look twice at this advert. Some might say that this is just because I'm a male that I am saying that, but after asking some women for their opinion they have said the same thing. Overall the advert is successful as it sells the product to me and I would consider buying such a product for a female friend. It is clear that this advert is using s*x appeal to try and sell the product and this helps the overall success of the advert. ...read more.

The key words and phrases (as mentioned before) have to be the ones that suggest masculinity. This is because men see soaps and other skin products as 'soft'. So the words that keep the masculine sense make sure that men find this advert appealing and therefore keep the product in mind. We also have the personification coming in as key thing this is because it allows the intended audiences to relate to the product and feel comfortable about it and so therefore have less qualms about buying it. The mention of robust in describing the soap is a key factor in getting the masculinity into the advert. The overall tone of the advert is a lot harsher than the one in the 'Immac' advert. It has less flamboyance and style but instead has a stronger more powerful way of putting over its message. It tries to sound like the busy lifestyle of businessmen and so therefore appeal to its intended audience. The main line of appeal has to be the bold text and the picture. The picture alone is not very appealing but with added bold text it does catch your attention very well. The success of an advert is judged on whether or not it sells the product to you. In this criterion it fails. I do not know why. It seems to do everything correctly, it relates to its audience, uses simple English, etc, but still does not seem to sell the product to me. The main reason being that it gives a lot of claims but not much fact and so does not make me feel confident about what I might get if I buy this product. Also, all the personification and wordplay in the advert does tend to confuse you and when something confuses you, you tend not to want anything to do with it. It may well appeal to its intended audience but it just did not sell the product to me. ?? ?? ?? ?? 1 ...read more.