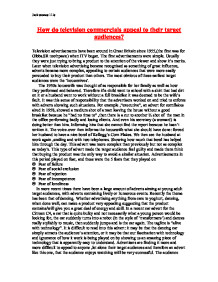 How do television commercials appeal to their target audiences

How do television commercials appeal to their target audiences? Television advertisements have been around in Great Britain since 1955,(the first was for Gibbs.SR toothpaste) when ITV began. The first advertisements were simple. Usually they were just trying to bring a product to the attention of the viewer and show it's merits. Later when television advertising became recognised as something of great influence, adverts became more complex, appealing to certain audiences that were more easily persuaded to buy their product than others. The most obvious of these earliest target audiences were the 'housewives'. The 1950s housewife was thought of as responsible for her family as well as how they performed and behaved. Therefore if a child went to school with a shirt that had dirt on it or a husband went to work without a full breakfast it was deemed to be the wife's fault. It was this sense of responsibility that the advertisers worked on and tried to enforce with adverts showing such situations. ...read more.

and dances really stylishly to music, then suddenly jumps and is the car again. The tagline is "alive with technology". It is difficult to read into this advert: it may be that the dancing car simply attracts the audience's attention, or it may be that our fascination with technology and ignorance of how it work is being played on by showing us an amazing piece of technology that is apparently easy to understand. Advertisers are finding it more and more difficult to appeal to anyone ,let alone their target audiences and therefore an advert like this one, that the audience enjoys watching will be very successful. The audience remember the brand (and hopefully the car.) Another recent advert featuring dancing is for the entire range of M(ller products. It features assorted people doing very difficult dances to the sound of a song stating 'I love life' and then show at the end of the advert all the people who were dancing eating one of the assorted M(ller products. ...read more.

And it is a good example of how a company will target their audience. The tagline 'whatever league you're in' reveals the real theme of this advert, that of equality. The whole point that is trying to be conveyed to the audience is that these stars playing football in a Sunday league are equal to them in their status and yet they still play like they do because of the sports equipment they wear. This is implied by the sudden zooms and stills of the boots these players are wearing. In conclusion it is quite easy to see that for an advert to be successful a target audience must be found and appealed to. This target audience depends on the product. An advertiser must have this target audience in mind when they film their advert and must be sure to include the aspects and techniques of advertising that appeal most to their target audience ; for example, humour. In essence all of us are a target audience for some product and it is just a matter of time before we fall prey to new clever advertising techniques and shiny new technology. ?? ?? ?? ?? Jack stones 11ls ...read more.