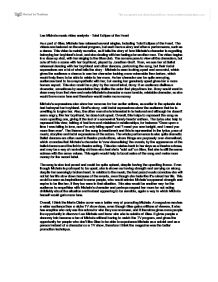 Lea Michele music video analysis - Total Eclipse of the Heart As a part of Glee, Michele has released several singles, including Total Eclipse of the Heart. The videos are featured on the actual program, but each have a story and often a performance, such as a dance. This video is mainly narrative, as it tells the story of how Michele's character is regretting betraying her boyfriend's trust, and also dealing with her feelings for another man. The video begins in a close up shot, with her singing to the Glee club. The camera pans to view all the characters, but cuts off into a scene with her boyfriend, played by Jonathan Groff. Then, we see her at Ballet rehearsal dancing with her boyfriend and other dancers, performing the song, but their facial expressions are a lot of what tells the story - Michele is seen looking upset and sorrowful, which gives the audience ...read more.

Also, the other man she is interested in is featured and although he doesn't seem angry, like her boyfriend, he does look upset. Overall, this helps to represent the song as more upsetting one, giving it the feel of a somewhat 'lonely hearts' anthem. The lyrics also help to represent this view, talking of lost love and mistakes in relationships, for instance "Once upon a time I was falling in love, now I'm only falling apart" and "I need you now tonight, and I need you more than ever". The theme of the song is heartbreak and this is represented in the lyrics, pace of music, storyline and facial expressions of the actors. The whole performance is also quite dramatic. Ballet dancers are often used in theatre productions, where things are purposely over-dramatised, which connotes that Michele's character is 'over-dramatising' the events, by the appearance of the ballet dancers and the link to theatre acting. ...read more.

This also would be another way for the audience to empathise with Michele's character and perhaps respect her more for not acting childishly about the situation and instead appearing to be sensible, again a way in which Michele herself would gain more fans. Overall, I think the Marie Claire cover was a better way of promoting Michele. A magazine reaches a wider audience than a niche TV show does, even though Glee gains millions of viewers, it also has sceptics who only see the actors for who they are onscreen, and it therefore gives more people the opportunity to discover Lea Michele and know who she is outside of Glee. It gives people a doorway into become a fan of Michele without having to watch the TV program, and gives the opportunity for people who don't like Glee to be able to experience Michele as a soloist and as a person instead of a character on a TV show, therefore I think the magazine was the better promotion technique. ...read more.