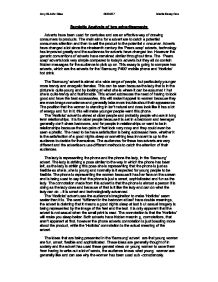 Semiotic Analysis of two advertisements Adverts have been used for centuries and are an effective way of drawing consumers to products. The main aims for a advert are to catch a potential consumers attention and then to sell the product to the potential consumer. Adverts have changed a lot since the nineteenth century the 'Pears soap' adverts, technology has improved greatly and the audiences for adverts have changed too. However the generic conventions of adverts have remained similar throughout time. The 'Pears soap' adverts look very simple compared to today's adverts but they all do contain hidden messages for the audience to pick up on. This essay is going to compare two adverts, which are the adverts for the 'Samsung P400' mobile phone and 'Horlicks' hot drink. The 'Samsung' advert is aimed at a wide range of people, but particularly younger more trendy and energetic females. This can be seen because the lady that is in the picture is quite young and by looking at what she is where it can be assumed that she is quite trendy and fashionable. This advert addresses the need of having to look good and have the best accessories, this will make it appeal to women because they are more image conscience and generally take more trouble about their appearance. ...read more.

The connotation is that the 'Horlicks' will make you sleep better. Both adverts have hidden meaning, connotations, that aren't apparent at first, however the phone adverts connotation is just boasting more about the product, while the 'Horlicks' connotation is the actual meaning of the advert. The ideas that are being presented in the 'Samsung' advert are that young women are fun, smart, flexible and sophisticated. These ideas are generally thought of in society and the advert has used these general views on young women to save them from having to write out a lot of words, the audience knows what young women are generally like and can see why the women has been used sub-consciencely. The 'Horlicks' advert also presents some idea, it shows some feet in a bed looking cosy, generally this is how people expect a happy couples feet to be while they are in bed, although in real life it probably doesn't happen very often. The idea that a good night sleep gives satisfaction is also been presented in this advert. There are a lot clearer ideas being represented in the 'Samsung' advert. In the 'Samsung' mobile phone advert the institution has made the decision to show the women as young and free women to sell the phone because of her unusual pose people will be drawn to her and then look at the rest of the advert. ...read more.

The language used in this advert is quite simple which makes it easy for the audience to relate too but it is not colloquial which reflects the sophistication of the phone. There are two messages being given out by the 'Horlicks' advert the denotation and the connotation. The denotation is that 'Horlicks' will brighten up your s*x life and give you more satisfaction, while the 'true' meaning is that 'Horlicks' will give you a better night sleep hence more satisfaction. This pun is clever as it creates phallic imagery and this makes an advert more appealing. The small print at the bottom confirms the connotation that the reader will have already made, this confirmation will give the audience more faith in themselves and maybe make them buy the product. The language in this advert is slightly more complicated than the other advert, because of the pun. The more complicated language reflects the more complicated and older audience that this advert is aimed at. The adverts are both effective and successful in their own ways they both capture their audiences well and show off their products. The 'Horlicks' advert uses the audiences imagination and puns to intrigue the audience into buying their product, while the 'Samung' advert boasts about the product and plays on the audiences need to look good to make them buy the product. Both adverts are very effective and sell their products in unique and original ways. Amy St.John Glew 06/05/07 Media Essay One ...read more.