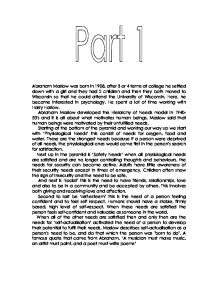 the Hierarchy of Needs

Abraham Maslow was born in 1908, after 3 or 4 terms at college he settled down with a girl and they had 2 children and then they both moved to Wisconsin so that he could attend the University of Wisconsin. Here, he became interested in psychology. He spent a lot of time working with Harry Harlow.

Abraham Maslow developed the Hierarchy of Needs model in 1940-50's and it is all about what motivates human beings. Maslow said that human beings were motivated by their unfulfilled needs.

Starting at the bottom of the pyramid and working our way up we start with ‘Physiological Needs’ this consist of needs for oxygen, food and water. These are the strongest needs because if a person were deprived of all needs, the physiological ones would come first in the person's search for satisfaction.

Next up in the pyramid is ‘Safety Needs’ when all physiological needs are satisfied and are no longer controlling thoughts and behaviours, the needs for security can become active. Adults have little awareness of their security needs except in times of emergency. Children often show the sign of insecurity and the need to be safe.

And next is ‘social’ this is the need to have friends, relationships, love and also to be in a community and be accepted by others. This involves both giving and receiving love and affection.

Second to last be ‘self-esteem’ this is the need of a person feeling confident and to feel self respect. Humans should have a stable, firmly based, high level of self-respect. When these needs are satisfied the person feels self-confident and valuable as someone in the world.

When all of the other needs are satisfied then and only then are the needs for ‘self-actualisation’ activated the need of a person to develop their potential to fulfil their needs. Maslow describes self-actualisation as a person's need to be, and do that which the person was "born to do". A famous quote that came from Abraham, ‘A musician must make music, an artist must paint, and a poet must write poems’

Basic needs are physical needs such as water, food and safety. Higher needs are more mental, like being confident, having self respect and having a relationship and friends.

This theory can be useful during advertising because if the advert meets the needs of a human being they will want it and be more interested than if it didn’t have anything to do with them.

The product I am analysing is underwear, my old advert is triumph underwear and it was made in 1969 and my new ad is Wonderbra and was made in 2005. On the triumph advert the women is walking through a group of Arab men and they are supposed to be buying her. This connotes that if you wear this underwear rich men will want you. It is a long shot and the model has been lit with a spot light. The advert is sexist and racist and would not be allowed to be published now days. On the new ad there is just a women model with a black bra on, with a slogan ‘no body is perfect’, this is saying that the bra will make you perfect. It is a medium close up shot so that we can see her chest because that is where the ‘Wonderbra’ is.

In the triumph advert the model is under a bright spot light so she stands out because she is wearing the product, and the Arab men have got dimmed lights on them so that they don’t take all the attention away from the model because the model is the main reason of the ad as she is the one wearing the underwear. On the new advert the model is also spot lit and there isn’t any other light in the advert so the light on her isn’t as strong as the one in the old ad.

On my old advert the typography is all in sans serif and all of the text is in white. The slogan and the brand name have been enlarged and have been made bold which makes it stand out. In the newer ad the text is also sans serif and white but it is on a black background which makes it stand out as well. The brand name has been enlarged in yellow text and is on the same black background for the same reason of standing out. Both ads used san serif because it is a common font and easy to read.

The image of the old ad is a woman in her 20’s walking through a group of Arab men who are supposed to be buying her; she is also standing very confident. The image of the newer ad is just a medium close up shot of a model in her 30’s modelling the ‘Wonderbra’ with a little pose by putting her hands on her hips and with a bit of a cheeky smile.

The language used in the old advert is meant to be a joke saying ‘undies to be sold in’. The slogan anchors the meaning of the picture because there is a woman getting sold in these undies, as they said on the ad, this is very sexist and could offend women as they are exploiting this women trying to use her to sell the underwear.  The language used in the newer ad is a bit sarcastic by saying ‘let’s keep in touch’ and also anchors the meaning on the picture.

The product shot of the triumph underwear in the old ad is on a woman model in the middle of a group of Arab men, this is stereotypical because it just Arab men, they are trying to say Arab men like to buy white women. Also this is racist as this could offend Arab men and because they have put a white woman is a group of dark coloured skin Arab men. The product shot of the ‘Wonderbra’ is on a woman model but there is no one else in the ad so all the attention is on the model. On both of the ad’s the models are full chested women and have a good figure the reason for this is that if they were ugly and fat no one would really be interested, whereas they would be like ‘wow’ she looks good in that, and they would be more likely to go and buy some triumph underwear etc.

I think that the old advert is trying to meet the needs of self-esteem because in the picture the model is standing there semi-naked looking very confident. I think that the newer ad is also trying to meet the needs of self esteem and self actualisation because of the picture and the slogan ‘no body is perfect’ but the whole ad together is trying to say that the ‘Wonderbra’ will make you perfect.

Here are some key similarities and some key differences between my two advertisements. I’ll start with the similarities.

On both of the adverts the models stand out and are the main part of the ad as they are the ones wearing the underwear. The models are both good looking, young and both are full chested women. On the old ad there is a black back ground and on the new one there is black and little bits of pink on the sides, both of these back grounds aren’t shocking and that noticeable so the attention isn’t taken away from the model who is wearing the underwear . This also enables the focus of the advert to stand out. The target audience of both adverts is around 20 to 35 years old because in both adverts the model are young and look fashionable and glamorous, but the bra in both ads looks like a bra for the middle age generation not too young and not too old. Also another similarity is on both models the bra is made to stand out as it is the main subject of the ads.

Some differences are the new advert only has a brand name and a website address, whereas the old ad has a short paragraph describing the underwear and a brand name at the bottom. Another difference is the new advert has only one person in it and the old advert has the model and a group of Arab men. The reason for this is the old ad needs the Arab men in it to get there point and story across to the audience and the new one doesn’t need any one else. The picture of the model in the new advert is a medium close up shot and the old advert is a long shot. The old advert has to be a long shot because we need to be able to see the other people in the advert and not just the model modelling the underwear. In the old advert the writing is dull and boring and hasn’t been put onto a separate background so that it stands out, whereas in the new advert the writing stands out because it is bold and has been put onto a black box background.