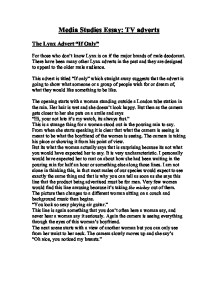 Media Studies Essay: TV adverts The Lynx Advert "If Only" For those who don't know Lynx is on if the major brands of male deodorant. There have been many other Lynx adverts in the past and they are designed to appeal to the older male audience. This advert is titled "If only" which straight away suggests that the advert is going to show what someone or a group of people wish for or dream of, what they would like something to be like. The opening starts with a woman standing outside a London tube station in the rain. Her hair is wet and she doesn't look happy. But then as the camera gets closer to her she puts on a smile and says "Hi, your not late it's my watch, its always fast." This is a strange thing for a woman stood out in the pouring rain to say. From when she starts speaking it is clear that what the camera is seeing is meant to be what the boyfriend of the women is seeing. ...read more.

The next scene shows a woman standing the looking at the camera and she, "You forgot my birthday" The thought running through my mind is that the mood has changed. He's not going to get out of this one. It is a very stereotypical view women often have of men is that we often forget there girlfriends or fianc�s or wives birthdays. I have seen many Television shows where this story is played out and it often leads to the couple fighting, occasionally plates are thrown (but not always unfortunately), the guy goes out and buy's his wife something special, says sorry and they make up and live happily ever after. But to my horror this is not what happens here. The woman goes on to say, "That's ok, you'll remember my birthday next year" Never!! A woman would never say that. But the advert is titled If Only so it is what men wish that there women would say so I'll go along with that for now. ...read more.

"The Lynx effect." This advert doesn't employ the use of any special effects, vibrant colours or big flashy messages flying across the screen because these things will not attract its target audience. This advert is aimed at young men especially, so the advert is comical and has many beautiful women in it to attract that audience. It does have background music which was made especially for the advert. There is no singing. The music starts slow and has a very The adverts title "If only" is very appropriate because the advert is showing what most men would like women to say in the common situations that are played out in the course of the advert. What the women say is in fact the complete opposite of what they would say, but the advert wants men to believe that using Lynx will make the women say what men want them to. The Lynx effect is supposed to overpower the women into worshipping men. Obviously this doesn't happen but hey men aren't all as smart as me and most of them would do anything to get a woman. It's pathetic really. ...read more.