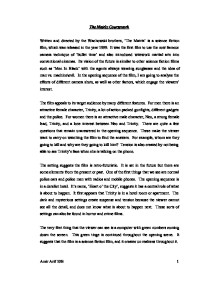 The Matrix Coursework Written and directed by the Wachowski brothers, 'The Matrix' is a science fiction film, which was released in the year 1999. It was the first film to use the now famous camera technique of 'bullet time' and also introduced wirework martial arts into conventional cinemas. Its vision of the future is similar to other science fiction films such as 'Men In Black' with the agents always wearing sunglasses and the idea of man vs. machine\evil. In the opening sequence of the film, I am going to analyse the effects of different camera shots, as well as other factors, which engage the viewers' interest. The film appeals to its target audience by many different features. For men there is an attractive female character, Trinity, a lot of action packed gunfights, different gadgets and the police. For women there is an attractive male character, Neo, a strong female lead, Trinity, and a love interest between Neo and Trinity. There are quite a few questions that remain unanswered in the opening sequence. These make the viewer want to carry on watching the film to find the answers. For example, whom are they going to kill and why are they going to kill him? Tension is also created by not being able to see Trinity's face when she is talking on the phone. The setting suggests the film is retro-futuristic. ...read more.

Light is reflected of her leather suit so again our attention is focussed on her. Light comes from within the window that Trinity is about to jump through. This shows that Trinity is focussed on the window, so makes us look at the window also. After Trinity has jumped through the window and is at the bottom of the stairs, the swinging light helps to create tension and suspense. In the scene with the garbage truck, its lights are directed towards the phone box. This shows that the truck is heading towards the phone box, and that Trinity's attention is on the phone box. This makes us also focus our attention on it. When the three agents come out of the truck, the light is coming from behind them. We can only see half of their faces; this adds tension and mystery, and gives them an unknown side, perhaps showing why Trinity appeared so afraid of them. There are many different reasons why the characters wear the costumes that they wear. Trinity wears a black, shiny leather cat suit. This makes her appear almost super hero like, such as 'Catwoman' and is perhaps an early indication that she is on the side of good. She has a short practical haircut and wears black shoes. She is smartly dressed and very formal i.e. a professional. The shiny black colour contrasts with her skin; this draws attention to her face and allows us to see her expressions clearly. ...read more.

This makes them look less human. Throughout the film, a wide variety of camera angles have been used. At the first fight, when Trinity jumps in the air to kick, 'bullet time' has been used. This allows the audience to see the kick from all angles. The unique camera technique helps to keep the viewer interested. Later in the film, when Trinity is running from the police officers, motivated camera has been used. This makes her look strong and powerful because you can tell how fast she is running when the speed of the camera changes with her running speed. Alternate shots of her and the agent running are shown, creating suspense, as they seem equal in strength. When Trinity is on the stairs, she looks down and sees an agent. The camera then moves to a low angle shot of the agent. This makes the agent look powerful and important. The scene ends with the camera at a high angle shot as the truck crushes the phone box. This shows the audience the power of the truck and the destruction that it caused. 'The Matrix' questions our idea of reality and gives the common negative view of the future with technologies that we created being out of our control. The opening scene appeals to its target audience, by having a powerful female lead and being packed with action, as well as successfully creating suspense through use of different camera techniques, interesting connotations and strong characters. 1 Amir Arif 10B ...read more.