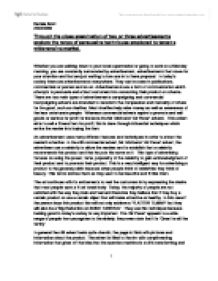 Through the close examination of two or three advertisements explore the range of persuasive techniques employed to target a wide-ranging market.

Through the close examination of two or three advertisements explore the range of persuasive techniques employed to target a wide-ranging market. Whether you are walking down to your local supermarket or going to work on a Monday morning, you are constantly surrounded by advertisement, advertisements that crave for your attention and that are just waiting to lure use in to there proposal. In today's society there are advertisements everywhere. They can be seen in publications, commercials or posters and so on. Advertisements are a form of communication which attempts to persuade and attract costumers into consuming their product or scheme. There are two main types of advertisements campaigning and commercial. Campaigning adverts are intended to transform the compassion and mentality of others for the good, such as charities. Most charities help raise money as well as awareness of the less unfortunate people. Whereas commercial adverts aspire to promote and sell goods or service for profit for instance the Mr. Motivator 'Air Pacer' adverts. This advert aims to sell a fitness item for profit; this is done through influential techniques which entice the reader into buying the item. An advertisement uses many different features and techniques in order to attract the reader's attention. ...read more.

This may be because in a T.V commercial the advertisers can interact with the audience and allow them to see and feel what is going on in the commercial, this techniques is well portrayed in the Levi's jeans infomercial. The advertisers use the dramatic use of a hostile location and apprehensive music create a feeling of suspense and tension which help show the audience what an antagonistic place it is. The advert is set in cold war Russia 1917. When the advert first begins we see that it is in black and white giving it inhospitable look to the landscape. There is a large portrait of what looks like the communist leader of Russia. The image appears to be looking down at the people and watching them, like the famous show Big Brother, his eyes seem to follow you wherever you go. A young attractive male has just arrived in the country and is tying to smuggle in a pair of Levi's jeans and luckily he does. There are many guards present, which all have a similar look to each other, they are very aggressive and hostile all with straight faces as if they where in the army. ...read more.

The advertisers use the brilliant effect of only using test right at the end of the advert. 'It takes up to 40 dumb animals to make a fur coat, but one to wear it' this suggest to the audience that we are lucky enough to stand up for ourselves, so we should help the 'dumb' (the mute) animals to speak out on their behalf and save them. What is presented to us is a slaughter house the audience can have a preview of what the innocent animals go through. Advertisements plays a big part of our live, at one moment it can amuse us and in the next it can gives us the shock of our live. Both still and television adverts have some similarities and differences such as the use of logos (the Levi's red label and the anti-fur red logo). But a difference between still and television adverts is that still adverts cannot use the effect of sound to entice the viewers. Advertisements have the power o change our minds only by using a range of effective, persuasive techniques. These could be an intense piece of music; like in the Levi's Jeans advert or touching phrase just like the one in the Lynx Anti-Fur advert. ?? ?? ?? ?? Daniela Broci 23/02/2009 1 ...read more.