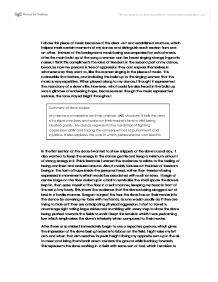 I chose this piece of music because of the clear-cut and established structure, which helped mark certain moments of my dance and distinguish each section from one an other. Instead of the background music being accompanied by actual words, after the main build up of the song a woman can be heard singing strange hypnotic noises. I think this compliments the idea of freedom in the second part of my dance, because now my persona is free of oppression they can express themselves in whatever way they want to, like the woman singing in the piece of music. It is noticeable that before, and including the build up to the singing woman that the music is very repetitive. When played along to my dance, I thought it represented the monotony of a slave's life. However, what could be also heard in the build up was a glimmer of endearing hope, because even though the music represented sadness, the tone stayed bright throughout. In the first section of the dace I wanted to show snippets of the slave's usual day. I also wanted to keep the energy in the dance gentle and keep a minimum amount of strong energy in it. ...read more.

Whilst running through my circular pathway, I held my right arm out to convey the idea of the slave trying to make the most of the new found space around them. In section B I wanted to mainly use movements that symbolised freedom instead of the daily routines of the slave. After running around in the circular pathway, I lurch forward at the build up of the dance making a fist with my hand, as here I wanted to include one of my dance motifs. For another one of my movements I stand on my tip toes and make a v shape with my arms to represent my persona basking in the space all around them. I have experimented with a number of movements in the next parts of the dance, because I wanted to show that my persona is free to try out new things and be themselves. I leap onto the floor which is supposed to represent a giddy action of joy and then soon return to a standing position. I further try new moves which the audience hasn't seen before. For example, I bend into a hunched position and then jump whilst swinging my arms past my legs. ...read more.

I used all of my main movements in the beginning without crowding the first section or overcrowding other movements. Section B was a slight struggle for me as I wanted to use large, strong, dramatic movements but the ones I had created in my head were hard to physically perform. For example, the leaps I wanted to do were not doable in my range of skill. However, I overcame this by performing small leaps but with the maximum amount of energy I could exert into it. If I could work on this dance further I would love to explore my persona actual journey to emancipation in much more detail; I feel their story had to be cut short due to time and I think their is a lot more that could be told. Another reason for this is that I want to delve deeper into the hardships fighting for freedom brings, as I think I definitely skimmed over that aspect in my dance. Also, I would like to edit the music, as it is too long for my dance. Overall, I think I communicated the main idea of my dance clearly. Aided by my motif developments, I think the movements I used reflected the emotions of persona as well. ?? ?? ?? ?? ...read more.