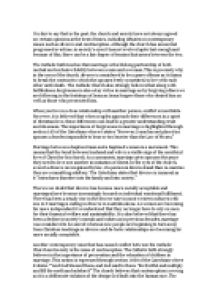 Catholic views on marriage and contraception.

﻿It is fair to say that in the past, the church and society have not always agreed on certain opinions at the best of times, including debates on contemporary issues such as divorce and contraception. Although the church has somewhat progressed overtime, in society?s eyes it has not evolved quite fast enough and because of this, there can be a fair degree of tension that arises between the two. The Catholic faith teaches that marriage is the lifelong partnership of both mutual and exclusive fidelity between a man and a woman. This is precisely why in the eyes of the church, divorce is considered to be a grave offense as it claims to break the contract to which the spouses freely consented, to live with each other until death. ...read more.

This means that the bond between husband and wife is a visible sign of the sacrificial love of Christ for his church. As a sacrament, marriage gives spouses the grace they need to love one another in imitation of Christ. In the eyes of the church, even if a divorce is recognised by law, if a person is divorced and then re-marries they are committing adultery. The Catechism states that divorce is immoral as it ?introduces disorder into the family and into society.? There is no doubt that divorce has become more socially acceptable and marriages have become increasingly focused on individual emotional fulfilment. There has been a steady rise in the divorce rate in most western cultures with one in 3 marriages ending in divorce in Australia alone. ...read more.

fruitful and multiply and fill the earth and subdue it? The church believes that contraception is wrong as it is a deliberate violation of the design God built into the human race. The pleasure that sexual intercourse provides is an additional blessing from God, intended to offer the possibility of new life while strengthening the bond of intimacy, respect, and love between husband and wife. The loving environment this bond creates is the perfect setting for nurturing children. The only way for a catholic couple to be faithful to the church?s teachings on human sexuality and to avoid having children is to use ?natural? family planning. Many Catholic?s have decided to disobey the church teaching in this part of their lives, causing a substantial breach between the laity and the church. ...read more.