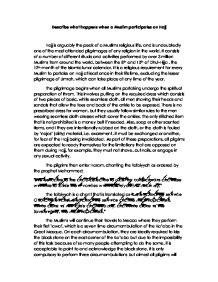 Describe what happens when a Muslim participates on Hajj

Describe what happens when a Muslim participates on Hajj Hajj is arguably the peak of a Muslims religious life, and is undoubtedly one of the most attended pilgrimages of any religion in the world. It consists of a number of different rituals and activities performed by over 3 million Muslims from around the world, between the 8th and 13th of Dhul-Hijja , the 12th month of the Islamic lunar calendar. It is a religious requirement for every Muslim to partake on Hajj at least once in their lifetime, excluding the lesser pilgrimage of Umrah, which can take place at any time of the year. The pilgrimage begins when all Muslims partaking undergo the spiritual preparation of Ihram. This involves putting on the required dress which consists of two pieces of basic, white seamless cloth, all men shaving their heads and sandals that allow the toes and back of the ankle to be exposed. There is no prescribed dress for women, but they usually follow similar rules to the men wearing seamless cloth dresses which cover the ankles. ...read more.

Later on in the day, the pilgrims perform Sa'y or the 'running' between the hills of Mt Safa and Mt Marwah. This used to be in the open air, but is now performed entirely underground in air conditioned tunnels, and there is only a short section of the track where the pilgrims are permitted to run, because of health and safety reasons. There is also an extra lane for the disabled. As part of this particular ritual, the pilgrims then drink from the ZamZam well, which is available in coolers throughout the Great Mosque. The pilgrims then travel to Mina, usually by foot, where they spend the night in prayer and meditation, in a city of temporary tents set up by the Saudi Arabian government. The following day they will travel to the plain of Arafat and Mt of Mercy and spend the day, and most specifically the afternoon, praying. There is no specific programme of events or sermon held on this day, but it is required for every pilgrim to spend at least the afternoon praying, meditating, and considering the rest of their life path, else the pilgrims Hajj is considered invalid. ...read more.

Traditionally, goats, sheep camels and cows are sacrificed, but any animal can be sacrificed if these are unavailable. Butcher houses, will slaughter one sheep or goat per person, or a camel or cow can be enough sacrifice for up to 7 people. On Hajj, the meat is then packaged and sent to the poor, but other Muslims celebrating the festival worldwide are only required to donate a third of the meat to the poor, although many people will donate more. Finally, the pilgrims must leave Mina before sunset on the 12th and travel to Mecca, for the Tawaf al-Wada, or the 'farewell' tawaf. It consists of the same routine as the first tawaf that was performed on the 8th Dhul-Hijja. On the 13th of Dhul-Hijja, the pilgrims have finished the required events of Hajj and go their own ways. Many will travel to Medina to visit the Mosque of the Prophet, which is home to the tomb of Mohammed and his daughter Fatimah. Others may travel elsewhere around Mecca for sightseeing and pleasure, while others may just go home. ...read more.