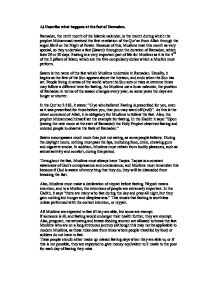 A) Describe what happens at the fast of Ramadan. Ramadan, the ninth month of the Islamic calendar, is the month during which the prophet Muhammad received the first revelation of the Qur'an from Allah through the angel Jibril on the Night of Power. Because of this, Muslims treat this month as very special, so they undertake a fast (Sawm) throughout the duration of Ramadan, which lasts 29 or 30 days. Fasting is a very important part of life for Muslims as it is the 4th of the 5 pillars of Islam, which are the five compulsory duties which a Muslim must perform. Sawm is the name of the fast which Muslims undertake in Ramadan. Usually, it begins as the first of the Sun appears above the horizon, and ends when the Sun has set. People living in areas of the world where the Sun sets or rises at extreme times may follow a different time for fasting. As Muslims use a lunar calendar, the position of Ramadan in terms of the season changes every year, so some years the days are longer or shorter. In the Qur'an 2:183, it states: "O ye who believe! Fasting is prescribed for you, even as it was prescribed for those before you, that you may ward off (evil)". As this is the direct command of Allah, it is obligatory for Muslims to follow the fast. ...read more.

During the fast, everyone is equal. Everyone undertakes the fast on the same level, regardless of status, wealth, race or gender. This reminds Muslims of the equality of everybody in the Ummah before Allah, and that he will judge them all equally both during and at the end of life. It also allows Muslims to empathetise with the poorer members of the Ummah through this equality. The fast gives better-off Muslims the chance to experience the lack of food endured by people who live in poorer countries, and through this empathy allows them that they have an obligation to help the needy people in the world. Ramadan helps form a sense of togetherness and community between Muslims. As everyone within the Ummah is undertaking the same hardship, friendships are strengthened as people help each other through the fast and the lack of self-indulgence gives time for families and friends to become closer. In countries where the majority of the population is not Muslim, this could have both positive and negative effects. As Muslims are in the minority, the bonds between Muslims will be stronger than ever as they support each other during Sawm. However, Muslims may feel isolated from non-Muslims who are not enduring the same hardship and may be ignorant of the Muslim practices, and as a result there could be greater separation between Muslims and non-Muslims during the month of Ramadan. ...read more.

Muslims undertaking sawm will also have many problems in everyday life. For example: they will not be able to concentrate on their work or schooling as well; if they have exams during Ramadan they may not be as successful; if they have a position of responsibility, the fasting may lead to harm of people under their care; and if they are driving, they will not be able to concentrate as well due to the hunger and this could present a risk. This could also harm the economy of a country: if the vast majority of people are fasting and are not able to work as efficiently, this will harm the country as a whole and people could become poorer as a result. Finally, through fasting a Muslim may become too self-focussed. They may just be fasting to ensure that they go to Paradise on the Day of Judgment, and they may forget about the needs of others as a result, achieving the opposite of what they had the intention (niyyah) to do in the first place. To conclude, I agree with the statement in the question, as the advantages and disadvantages of fasting are many and diverse, as I have listed. However I believe that for a Muslim, the advantages greatly outweigh the disadvantages, as being a better Muslims spiritually and mentally is more important than their physical hardships and possessions. Islam teaches that people are to be judged on for their good deeds and their submission to Allah's will rather than any material or physical attributes, therefore fasting is much more advantageous than disadvantageous. ...read more.