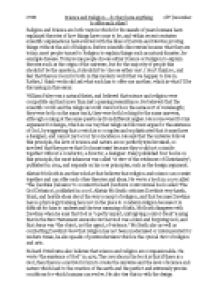 Science and Religion do they have anything to offer each other?

Transfer-Encoding: chunked ﻿CWK Science and Religion ? do they have anything 28th December to offer each other? Religion and Science are both ways in which for thousands of years humans have explained theories of how things have come to be, and within recent centuries scientific explanations have evolved with the likes of Darwin and Newton proving things without the aid of Religion. Before scientific discoveries became what they are today, most people turned to Religion to explain things such as natural disaster, for example disease. Today some people choose either Science or Religion to explain theories such as the origin of the universe, but for the majority of people this shouldn?t be the question, it shouldn?t be ?choose either one?. I don?t think so, and feel that there is room for both in this modern world that we happen to live in. Rather, I think we should ask what each has to offer one another, which is what I?ll be discussing in this essay. William Paley was a natural theist, and believed that science and religion were compatible and had more than just a passing resemblance. He believed that the scientific world and the religious world were both on the same sort of wavelength; they were both on the same track, they were both looking for the same answers, although coming at the same questions from different angles. ...read more.

This theory completely agrees with science, and makes it perfectly easy to comprehend science and this theory together, because science can explain how our finely tuned universe, solar system and planet allow us to exist, but religion can explain before this, why they all happen to be so coordinated and harmonised ? God took the role of setting out the circumstances which were suitable for the universe to originate. Charles Darwin was a, at the time, controversial geologist and naturalist who developed the theory of evolution. He was perceived by many people at the time to be a radical extremist, because he did not fit into the majority of other people?s beliefs at the time that we were created in the likeness of God, as was nature and animals. His theory of evolution was developed by looking at many species and variants of plants and said that he could identify common characteristics between them and animals, and this suggested that they had a mutual ancestor ? meaning they evolved from a former species. Darwin?s theory goes against the diehard beliefs of orthodox believers, that we were all individually created to the smallest detail by God, and this is why he was viewed as very controversial back in his time. However, with a hint of irony, as time has moved on and people have become more liberal, modern day religious organisations and communities accept his theory and have integrated it with their own theory, whatever variant it might be for different institutions. ...read more.

That is not a perfect design, more of a bodge job, a temperamental system put in place because something better had not been thought of. My own personal opinion is one that both Science and Religion can coexist together, in harmony, and more importantly they can both be of a benefit to each other, rather than a hindrance. I agree with people like William Paley, where Science and Religion can both work together to prove one amazing answer, seen in the design theory. As you may have gathered, I am not one to necessarily agree with the way Dawkins lords his beliefs and ideas about the concept of religion and rains on the parades of those involved in religion, however I do believe that for example children need to be given a genuine and unbiased choice as to whether they believe from the heart in a religion, not just being a part of the religious organisation because their ancestors were. This is how people can become radicalised, which ties in rather well with the current affairs situation, as of January 2016, with IS over in Syria. Their mantra is in no way really related to Islam, and it is being used as an excuse to do what they are doing. Because people are growing up with this around them, they assume it?s true as they have no choice to believe differently. ...read more.