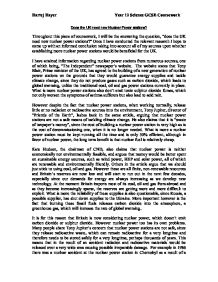 Throughout this piece of coursework, I will be the answering the question, “does the UK need new nuclear power stations?” Once I have conducted the relevant research I hope to come up with an informed conclusion taking into account all of my sources upon whether establishing more nuclear power stations would be beneficial for the UK.

I have attained information regarding nuclear power stations from numerous sources, one of which being, “The Independent” newspaper’s website.  The website states that Tony Blair, Prime minister of the UK, has agreed to the building of a new generation of nuclear power stations on the grounds that they would guarantee energy supplies and tackle climate change, since they do not produce gases such as carbon dioxide, which leads to global warming, unlike the traditional coal, oil and gas power stations currently in place. What is more nuclear power stations also don’t emit toxic sulphur dioxide fumes, which not only worsen the symptoms of asthma sufferers but also lead to acid rain.

However despite the fact that nuclear power stations, when working normally, release little or no

It is for this reason that Britain is now considering nuclear power, which doesn’t emit carbon dioxide or sulphur dioxide. However nuclear power too has its own problems. Many people share Tony Jupiter’s concern that nuclear power stations are not safe, since they release radioactive waste, which can remain radioactive for a very longtime and therefore needs to be stored safely for a very longtime, perhaps thousands of years. This means that in the result of an accident radiation and radioactive materials would be released over a very wide area causing possible irreparable damage.  For example in 1986 there was a nuclear accident at the nuclear power station in Chernobyl as a result of a steam explosion, which hospitalized 200 people, 31 of whom died. People also fear that if Britain turns to nuclear power, then other countries will follow suit and do the same. This not only raises the question of where will the radioactive waste be stored, if this does become the case, but it also means that the scale of possible nuclear disasters would be immense.

I obtained the core aspects of the above information from “The Independent” newspaper. I also used the “wikepedia” website,