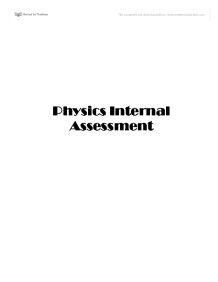 To conduct an experiment to investigate the effect of changing the mass of an object has on its acceleration when it is acted on by a constant force.

Table 1: Collection of Data for the acceleration of different masses

Air currents can affect the experiment because the reading on the weight scales may be different because of the pressure from the air and the wrong amount Oxalic Acid is used.

Because the acceleration only tested 5 times per mass, an accurate measurement of the acceleration could not be obtained because it did not take into account random errors that may affect the results of the experiment

Manufactured products are not exactly the same, and different products will change the outcome of the experiment.

eg. one trolley may not be the exact weight of another

Use the same equipment for the whole experiment

This is a good example of coursework, however it makes a few minor mistakes. The student has answered the question of how the mass of an object affects its acceleration very well. He has made a table which accurately shows ...

This is a good example of coursework, however it makes a few minor mistakes. The student has answered the question of how the mass of an object affects its acceleration very well. He has made a table which accurately shows that as the mass increases, the acceleration decreases. He also made a graph of his results which comes out as a straight line, showing that the result is linearly proportional. Be careful not to conclude it is directly proportional, as for it to be directly proportional it would have to go through the co-ordinate (0,0) which it does not. I would also of recommend that he could of worked out the gradient of his graph to see how much mass affects acceleration.

The student shows appropriate analytical skills, they have first made a prediction based on theory and have in their conclusion tied their results to theory as is a good idea as it will help understanding and improve the quality of the coursework. They however should of made sure that the force was constant in their experiment, as you should make sure all variables other than your independent and dependent variables are controlled, and this varying force could make the experiment indicate incorrect results. After doing this they could also work out the force by working out the area under the graph, since F=ma, and the graph was m against a, the area will be the force.

The student's spelling and grammar are fine and they have followed convention by putting their independent variable on the x axis as they should, and the dependent variable on the y axis. Be careful to make sure you follow this convention. They have also made sure to repeat their results 5 times and work out an average, and clearly laid out their method before doing the experiment which is very helpful to ensure that the experiment goes smoothly. You donÃ¢â‚¬â„¢t want to get to the point of doing the experiment and then not be sure what to do.