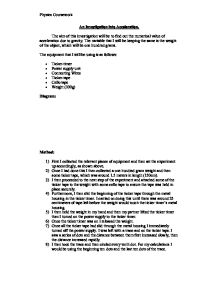 An Investigation into Acceleration.

Theaim of this investigation will be to find out the numerical value of acceleration due to gravity. The variable that I will be keeping the same is the weight of the object, which will be one hundred grams.

The equipment that I will be using is as follows:

Hypothesis:I believe that the trace produced will show that the space between the dots gradually increases. This will then allow me to find out the value of acceleration.

One factor that will affect acceleration is the potential energy.Potential energy is stored energy possessed by a system as a result of the relative positions of the components of that particular system. In this case it is a weight with a mass of 100 grams, which is attached to a length of ticker tape; this is held at a certain height, and then released. In this experiment gravitational potential energy, is changed to kinetic energy. The weight then accelerates downwards.

Acceleration is a vector quantity which is defined as "the rate at which an object changes its velocity." An object is accelerating if it is changing its velocity. Objects in a gravitational field experience a downwards force, this is usually their weight. If this is unbalanced, this will result in acceleration downwards. In this case the forces are unbalanced the downward force is greater and it falls to the ground.

There are many things that could have been improved in this experiment, an example of this is the ticker timer was not placed on a solid surface, instead it was held.

Another improvement could have been to use a light gate, as this would have allowed more accurate results: 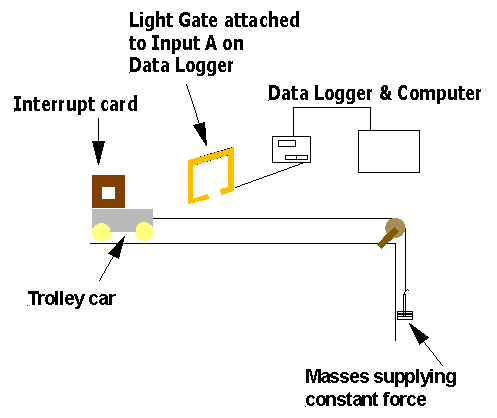 1.   Set up the equipment as shown. Measure the mass of the trolley car with string & interrupt card attached.

2.   Launch and set-up the Timing Software.

4.   Hold the trolley car in the start position.  Check that the string moves freely over      the pulley with the weight attached and that the trolley car will move in a straight path through the light gate without colliding with anything.

5.   Return the trolley car to the start position.  Click on the Run icon to start the timing software and release the trolley car.  The acceleration of the car will be measured as the interrupt card passes through the light gate and should appear in the Table & graph on the computer screen.

6.   Click on the Run icon to turn off the timing and move the car back to the start position.

7.   Click on the Run icon to re-start the timing & release the trolley.

This is an alternative method that can be used to calculate acceleration due gravitational potential energy.