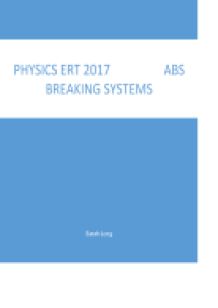 Transfer-Encoding: chunked ﻿________________ With approximately 8.8 million registered motor vehicles in Australia as at 31 January 2017[1] the operating systems used to optimise user safety and the safety of other road users is becoming increasingly more sophisticated and necessary. One of these systems, the anti-Lock braking system (ABS), allows a car to stop in a shorter distance and maintain more control by applying the brakes in repeated bursts to maintain friction between the tire and the road. ABS is now prevalent in many motor vehicles, specifically the car. In cars without ABS, to avoid collisions the break is applied onto the brake pads for a continuous period of time causing the wheels to stop rotating. When the wheels of a vehicle lock, they are no longer rotating along the road, loose traction and instead begin to slide, causing a decrease in friction between the wheels and road[2]. Friction between two objects is a force that opposes movement of one object over the other. Under these circumstances, friction opposes the movement of the vehicle?s wheels along the road. ...read more.

System Overview As the break is applied a hydraulic disc brake system inside the vehicle transmits this pressure to the brake pads in each wheel in order to slow or stop the vehicle. By using an incompressible fluid such as breaking oil the pressure is transmitted through the system by pistons which are short cylinders in a tube moving against a fluid[7] (figure 2). This system is a result of foundation work done by Pascal. Pascal?s principle states that ?Pressure applied at any point of a fluid at rest is transmitted without loss to all other parts of the fluid.? [8] Diagram B2. Hydraulic disc brake system showing a cross-section of the master cylinder and caliper. The following equations outlines the change in force from when pressure is applied by the first piston to when it acts on the second piston. where Pascal?s principle states that pressure will not change and therefore area is the measurement that affects force[9]. This equation shows that if area decreases the force applied must decrease in order for pressure to remain the same. ...read more.

Due to static friction being stronger than kinetic, static friction has a higher coefficient and therefore higher coefficients give shorter stopping distances. The coefficient of static and kinetic friction on dry roads being 1 and 0.8 respectively (Boal, 2001) further proves that maintaining the existing static friction when attempting sudden stops is more efficient than changing to kinetic friction. Surfaces µ (static) µ (kinetic) Tire on concrete 1.00 0.80 Tire on wet road 0.60 0.40 Tire on snow 0.30 0.20 As the vehicles normal force remains constant the impact of a smaller coefficient means that there is less frictional force. Data provided by Ben Townsend shows that in many circumstances[10] the coefficient of static friction is higher than that of kinetic friction (table 1). For example let us assume that we have a car with ABS and a total mass of 1400kg travelling at 60km/h on a road needs to stop suddenly to avoid hitting a child. (see attached working) It is clear that in all circumstances ABS is beneficial by allowing the car to stop in a shorter distance when compared to no ABS. ABS decreases stopping distance minimising the impact of collisions and preventing most accidents. ...read more.