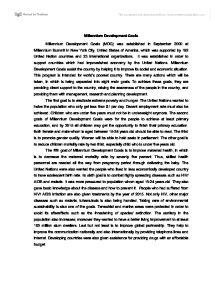 Millennium Development Goals (MDG) was established in September 2000 at Millennium Summit in New York City, United States of America, which was supported by 192 United Nation countries and 23 international organizations.

Millennium Development Goals Millennium Development Goals (MDG) was established in September 2000 at Millennium Summit in New York City, United States of America, which was supported by 192 United Nation countries and 23 international organizations. It was established in order to support countries which had impoverished economy by the United Nations. Millennium Development Goals assist the country by helping it to improve its social and economic situation. This program is intended for world's poorest country. There are many actions which will be taken, in which is being separated into eight main goals. To achieve these goals, they are providing direct support to the country, raising the awareness of the people in the country, and providing them with management, research and planning development. ...read more.

Both female and male whom is aged between 15-24 years old should be able to read. The third is to promote gender quality. Women will be able to held seats in parliament. The other goal is to reduce children mortality rate by two third, especially child who is under five years old. The fifth goal of Millennium Development Goals is to improve maternal health, in which is to decrease the maternal mortality ratio by seventy five percent. Thus, skilled health personnel are needed all the way from pregnancy period through delivering the baby. The United Nations were also wanted the people who lived in less economically developed country to have adolescent birth rate. ...read more.

Taking care of environmental sustainability is also one of the goals. Terrestrial and marine areas were protected in order to avoid its aftereffects such as the threatening of species' extinction. The sanitary in the population also increases; moreover they wanted to have a better living improvement to at least 100 million slum dwellers. Last but not least is to improve global partnership. They help to improve the communication nationally and also internationally by providing telephone lines and internet. Developing countries were also given assistance for providing drugs with an affordable budget. Resources: United Nations Development Program. 2010. What are the Millenium Development Goals? [online] Available at: http://www.undp.org/mdg/basics.shtml Millenium Project. 2006. Goals, Targets, Indicators. [online] Available at: http://www.unmillenniumproject.org/goals/gti.htm Millenium Project. 2006. What They Are. [online] Available at: http://www.unmillenniumproject.org/goals/index.htm ?? ?? ?? ?? ...read more.