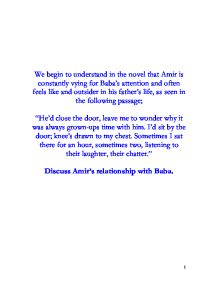 We begin to understand in the novel that Amir is constantly vying for Baba’s attention and often feels like and outsider in his father’s life, as seen in the following passage;

“He’d close the door, leave me to wonder why it was always grown-ups time with him. I’d sit by the door; knee’s drawn to my chest. Sometimes I sat there for an hour, sometimes two, listening to their laughter, their chatter.”

The ‘father-son’ relationship between Amir and Baba is not always positive throughout The Kite Runner. At the beginning of the novel, Khaled Hosseini gives an impression to the reader that Amir is looking for the love, respect and approval of Baba he felt he has never had. Whereas Baba feels that his son is not living up to his physical, social, religious and cultural expectations and provides little time for him. However, as the novel unravels the strength of the relationship between these two key characters increases and Amir’s constant vying for Baba’s attention produces positive results in the relationship. This essay will look at the development and change of the relationship between Amir and Baba and their characterisation as the novel progresses.

With Amir feeling that “Baba hated me a little”[1] and Baba feeling that Amir is one of those boys “who won’t stand up for himself and becomes a man who can’t stand up to anything”[2], the reader is able to understand the sketchy relationship between Amir and Baba - through the depiction of the characters and their interaction.

From early on, Amir is portrayed as a son who vies for Baba’s attention, being proud of him and continually admiring him and his work, “I wanted everyone to see that he was my father, my Baba”[3]. On the other hand Baba is portrayed as a father who believes that his son should be more motivated and more independent, a son who fulfils his expectations, “‘If I hadn’t seen the doctor pull him out of my wife with my own eyes, I’d never believe he’s my son’”[4], illustrating the true character of Baba and the sketchy relationship he has with his son.

From the first time Amir and Baba interact the reader understands the loss of love, “Sometime I asked if I could sit with him … it was always grown-ups time”[5] highlighting the rejection Amir continually feels at the beginning of the novel. Consequently the character of Rahim Kahn takes over the reins of ‘father’ for some time in which he guides and mentor’s Amir “I was always learning things about Baba from other people”[6], portraying the limited time Baba has for Amir and as a direct result Amir feels that he is an outsider in his life.

Additionally, Amir feels jealous of Hassan, whom the reader finds out is actually Amir’s brother. This jealousy, “I lied and told him [Baba] Hassan had the runs. I wanted him all to myself”[7], puts strains on Amir and Baba’s relationship and despite the fact that “I [Amir] was so proud of Baba of us”, Amir still feels that “Most days I worship Baba with intensity approaching the religious … but sometimes I wish I could open my veins and drain his cursed blood”, thus showing that the positive relationship is not always evident.

However the sketchy relationship between the father and son does not continue throughout the whole novel. After the kite running tournament, in which Amir wins, their relationship steadily improves and is a noteworthy example in their characterisation for it is after this event that a new relationship develops, one that Amir has been constantly seeking throughout his life.

As mentioned above the relationship before the kite running tournament was hazy but post-kite running tournament Amir’s life changes for him. He believes that if he were to win the kite running tournament it would “show him [Baba] once and for all that his son was worthy. Then maybe my life as a ghost in this house would finally be over”[8]. After cutting the last kite Amir remarks “right there was the single greatest moment of my twelve years of life, seeing Baba on that roof, proud of me at last”[9]. This single episode in the novel changes the relationship between Amir and Baba, aswell as the development of both characters, with Baba finally being proud of his son, and Amir, through the metaphor of kite flying by Hosseini, becomes a better kite flyer, a better person and a better son through the eyes of Baba.

Hosseini uses the metaphor of kite flying to represent the changing ‘father-son’ relationship, “the chill between me and Baba thawed a little … the reason for that was the kites. Baba and I lived … in different spheres. Kites were the one paper-thin slice of intersection between those spheres”[10], further illustrating that the winning of the kite flying tournament is a major turning point in the development of characters and the change in their relationship.

However the attention Amir has always wanted is not long lived. The incident in which Hassan was raped by Assef after the kite running tournament changes the relationship between not only Amir and Hassan but also Amir and Baba, for Amir finds it hard to live in the house, “I made sure our paths crossed as little as possible”[11] . Amir asks Baba if they could get new slaves but has terrible consequences with the relationship that Amir had always wanted was washed away. “I regretted asking it … but I think … our happy little interlude would have come to an end. Maybe not quite so soon, but it would have”[12], characterising feelings that Amir has - that he is and always will be an outsider in his father’s life.

It is evident however that despite Baba can “mould the world around him to his liking”[13], his character is inconsistent and hypocritical in some parts of the novel. Most evidently is the talk he gave to Amir about stealing, “when you kill a man, you steal someone’s life … when you tell a lie to steal someone’s right to the truth”[14]. However he has not applied this to his own life, despite his lessons that “It is better to be told the truth than comforted with a lie”[15] for the reader finds out that Baba is hiding a secret from Amir, hence provides the reader with the understanding of Amir and Baba’s relationship and more importantly the character of Baba.

As Kite Runner progresses both Amir and Baba undertake flee to America. It is here where Amir and Baba both discover themselves; Amir discovering that he misses Afghanistan and Baba believing that his son does live up to expectations undergoes an attitude transformation when he finally realises that Amir should not be an outsider in his life. The change and development of these characters is most prominent at Amir’s wedding with Baba remarking "‘Tonight I am too much happy … I am drinking with my son”[16]. Another noteworthy example is evident through Baba buying Amir his first car “‘I wanted to say more … how touched was by his act of kindness, how much I appreciated all that he had done for me, all that he was still doing”[17], thus portraying the positive relationship Baba and Amir have in America, aswell as the change in  Baba.

On the other hand the development of the character of Amir is evident through his self-discovery. He discovers himself as the novel progresses, seen through his own thoughts, “Do you have to always be the hero? … but I knew he [Baba] couldn’t – it wasn’t in his nature”, thus portraying that Amir develops his own attitudes, not his father’s and his approval.

America shows the development of Amir and Baba most significantly, in particular when Amir asks to marry Soraya, a fellow Afghani and future wife. This event is noteworthy for it portrays how the character of Amir has changed; from his youthful days when he constantly vies for his fathers attention to now when he is an adult, prepared to go his own way and not the way of his father. Additionally the reader is able to see the final development of Baba through his acceptance and pride of Amir, “‘it is the happiest day of my life’” was one remark Baba made on the day of the weeding, thus showing the change in both characters, and the opposite relationship they had in Afghanistan. For it is here where the reader understands that Amir’s relationship with Baba is no longer sketchy rather a strong father-son bond.

However it is not just the change in characters, it is the change in relationship between these two characters that makes it so noteworthy. In particular after the death of Baba and as Amir remarked “My whole life I had been ‘Baba’s son’. Now he was gone. Baba couldn’t show me the way anymore; I’d have to find it on my own”[18], thus further portraying that Kite Runner is a book of self-discovery for Amir who when comes to America continually matures and consequently becomes a positive and self-opinionated person.

After fleeing to America, Amir realises that it is Afghanistan what he misses and consequently after receiving news from Baba’s closest friend in Afghanistan, he returns to his country of war, as Rahim Khan remarked “There is a way to be good again”[19], resulting in him returning to redeem himself. It is back in Afghanistan were the reader is able to see a major development in the character of Amir, not only because Amir learns to fight and stand up for himself, but more importantly that it is after all those years with a sketchy relationship with Baba, it has turned him into the man he now is in Afghanistan

At the beginning of the novel Baba remarks that Amir is one of those boys “who won’t stand up for himself and becomes a man who can’t stand up to anything”[20] but it is in Afghanistan where Amir stands up to his long time rival, Assef. “I don’t know if I gave Assef a good fight … I had never so much as thrown a punch in my entire life”[21], further portraying the character development of Amir, and how he has changed since his youth. For in is youth he was bullied and tormented “‘I see how they push him around, give im a wack there … he never fights back, just drops his head”[22], providing a contrast of the childhood Amir and Amir as a man.

Amir and Baba do not always have a positive father-son relationship throughout Kite Runner. Baba feels that his son does to live up to many of his expectations and consequently Amir is constantly vying for attention. Their sketchy relationship develops in a positive manner as the novel progresses; from the kite running tournament, to fleeing to America. Additionally these two key characters developed themselves, with Baba becoming the understanding father and Amir self-discovers himself and finally returns to Afghanistan for one thing that life in America can not grant him: redemption, and thus showing Amir’s relationship with Baba throughout his life turned him into the man he is at the end of The Kite Runner for as he matures his relationship with Baba strengthens.