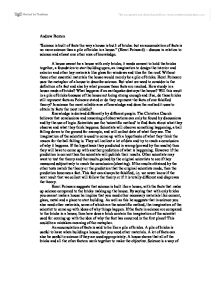 Science is built of facts the way a house is built of bricks: but an accumulation of facts is no more science than a pile of bricks is a house. (Henri Poincar) discuss in relation to science and atleast one other area of knowled

Andrew Benton "Science is built of facts the way a house is built of bricks: but an accumulation of facts is no more science than a pile of bricks is a house." (Henri Poincar�) - discuss in relation to science and atleast one other area of knowledge. A house cannot be a house with only bricks; it needs cement to hold the bricks together, a foundation to start building upon, an imagination to design the interior and exterior and other key materials like glass for windows and tiles for the roof. Without these other essential materials the house would merely be a pile of bricks. Henri Poincare uses the metaphor of a house to describe science. But what we need to consider is the definition of a fact and also by what process these facts are reached. How sturdy is a house made of bricks? What happens if an earthquake destroys the house? Will this result in a pile of bricks because of the house not being strong enough and if so, do these bricks still represent facts as Poincare stated or do they represent the facts of one falsified theory? Is science the most reliable area of knowledge and does the method it uses to obtain its facts the most reliable? ...read more.

This could be a mistaken meaning of the metaphor. An accumulation of facts is said to be like a pile of bricks. A pile of bricks is useful to have when building a house, but you need other materials. A lot of facts can also be useful to science if they are used appropriately. A house shows that all of the bricks and all the other factors work together to make the objective. Science is a way of knowing how things work. It is not however 100% certain of what it explains. How can we be sure that one day instead of an object falling to the ground it falls upwards to the sky. In this case the whole theory of gravitational laws would be wrong, all the theories and facts based upon its original use. We can compare this to how strong the house is, if the house is very strong, then all the bricks and cement and windows together make it like this. In the same way a strong science with a large degree of certainty has facts, theories and evidences all working together and nothing contradicts itself. If one different result were to falsify the theories and all other theories derived, then it would be as if one brick falls out, and so all the others fall down with it. ...read more.

For example, how can the facts found by science determine what the impacts of a natural disaster are, and how can they determine whether something is ethical or not. For this the social sciences come in more useful than the natural ones. We may have all the facts of a situation, know how everything works, but with these not be able to judge if the actions are ethical or not. In conclusion we have seen that, like a house, science is built up of more than just one raw material that does help to achieve its final goal. In science if one theory is falsified, all other theories derived from it are also falsified, just like a house falling apart. The bricks left at the end of the house falling apart could be falsified facts yet Poincare describes it as an accumulation of facts and thus implies that these facts derived from false theories are still facts. I think that the natural sciences are the most accurate sources of knowledge as their means of collecting data by the scientific method are more fair and reliable than those of the social sciences, where if the majority of results follow a pattern (trend) then the results are seen as reliable if repeated again. Despite the inaccuracy of the social sciences they are more likely to determine more ethically correct uses from facts gained by natural sciences. ...read more.