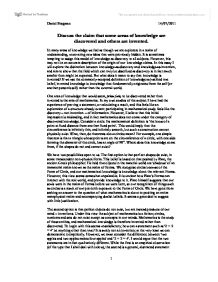 Discuss the claim that some areas of knowledge are discovered and others are invented. In many areas of knowledge we feel as though we are explorers in a realm of understanding, uncovering new ideas that were previously hidden. It is sometimes tempting to assign this model of knowledge as discovery to all subjects. However, this may not be an accurate description of the origin of our knowledge claims. In this essay I will explore the distinction between knowledge-as-discovery and knowledge-as-invention, and aim to show that the field which can truly be described as discovery is in fact much smaller than might be expected. But what does it mean to say that knowledge is invented? If we use the commonly-accepted definition of knowledge as justified true belief, invented knowledge is knowledge that fundamentally originates from the self (or another person's self) rather than the external world. One area of knowledge that would seem, prima facie, to be discovered rather than invented is the area of mathematics. In my own studies of the subject I have had the experience of proving a statement, or calculating a result, and this feels like an exploration of a structure already extant: participating in mathematical study feels like the discovery - not invention - of information. ...read more.

This point is even clearer if we look further into mathematics. At a basic level we may accept proofs by intuition - it is 'obvious' that two parallel lines will never meet. This emotional way of gaining knowledge is straightforwardly a product of the human mind, and qualifies as invented knowledge. But in the deeper reaches of pure mathematics, proofs proceed through application of rigorous symbolic logic, and no step can take place which does not follow the rules for symbol manipulation. It might seem that this is the purest form of reason as a means for discovering knowledge. However, if we take a closer look at formal mathematics, we still find axioms at the base of it which by their nature can be justified, if at all, by intuition only. Regarding them as arbitrary does not change mathematics at all, because mathematics is the study of the consequences of those axioms. For examples, non-Euclidean geometry is a self-consistent field in which parallel lines can meet. Because the axioms are produced by us, we must regard mathematics as a whole as a human product, and so any kind of mathematical knowledge is necessarily invented. Interestingly, this analysis hints at a way that mathematical knowledge could be made into discovery rather than invention. ...read more.

However, these inevitably rely on a fundamental value at the core - pleasure in utilitarianism, a 'good will' in Kantianism - and this value is not justified by reason or observation. Similarly to mathematics, secular ethics must be classed as invented because of the invention at the core. Examining the nature of our knowledge in its various areas has revealed that our initial assumptions about them may be false. Although we have an experience that feels like discovery, the actual processes that take place to give us knowledge in mathematics, ethics and (parts of) the natural sciences are more accurately classified as invention. The area of knowledge which genuinely qualifies as discovery is much smaller, and encompasses only direct observations of the world around us, possibly with the addition of moral commandments that come from God, for a theist. The majority of knowledge is therefore invented. Does this mean that we should not trust it? I believe that the fact that knowledge is invented does not necessarily weaken it beyond the point of usefulness. Mathematical knowledge is fundamentally based on invented assumptions, but this does not mean that the knowledge is not knowledge, or that we cannot make mathematical statements confidently. Any argument based on reason is in a sense invented (including this essay), but that does not mean that such an argument has no power. Word count: 1591 Daniel Bregman 14/07/2011 1 ...read more.