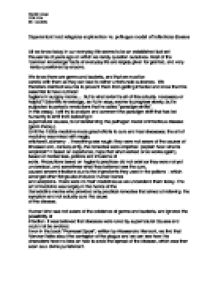 Supernatural and relegious explanation vs. pathogen model of infectious disease All we know today in our everyday life seems to be an established fact set thousands of years ago on which we rarely question ourselves. Most of the 'common knowledge' facts of everyday life are largely given for granted, and very rarely questioned by anyone. We know there are germs and bacteria, and that we must be careful with them as they can lead to rather unfortunate outcomes. We therefore disinfect wounds to prevent them from getting infected and know that it is essential to have outmost hygiene in surgery rooms.... But to what extent is all of this actually necessary or helpful? Scientific knowledge, as Kuhn says, seems to progress slowly, but is subjected to periodic revolutions that he called "paradigm shifts". In this essay, I will try to analyze and comment the paradigm shift that has led humanity to shift from believing in supernatural causes, to Understanding the pathogen model of infectious disease (germ theory). Until the 1500s medicine made great efforts to cure and heal disesases; the art of medicine was mixed with magic, witchcraft, alchemy . ...read more.

Some, however, thought that infectious diseases were due to an alteration of the normal state of the atmosphere, as a result of the presence of elements or fumes that were spread in the environment, and "absorbed" by humans. To guard against the spread of diseases, infected individuals were isolated from the community, and the entrance to cities was closely monitored. The first quarantine in history was instituted in Marseille, 1383. In the pre-scientific ignorance, mingled with superstition, developed the most varied and imaginative theories (curses ...), and there was a paradigm that prevailed on the others until it the established paradigm of spontaneous generation prevailed . Under this established paradigm, life arose spontaneously. This theory was imposed because it was supported by a religious vision that was adopted as a way to prove that everything in the world is made by God. According to this theory God created men as superior beings and animals and insects arose spontaneously from the mud and from rotting carcasses. Many tried to disprove the theory of spontaneous generation; among them Francesco Redi, who put three pieces of meat in three jars, one left open, one closed and the last one heavily covered with a fine gauze. ...read more.

Koch, the Nobel Prize for medicine supported the same thesis . Pasteur then started a revolution, prooving that germs cause disease, and profoundly altering the way we live and relate to people around us. The knowledge that there are tiny "critters" that lurk everywhere, even if we cannot see them, has led to better hygiene attitudes. This was definitely a good thing. The negative influence of such discovery is the isolation of people in the fear of the possibility of contagion; even a simple flu can be a reason for placing an individual in quarantine. Everythingis antiseptic, sterilized, sanitized .... and certainly our bodies, so little accustomed to germs and bacteria, have become weaker, free of strong defenses that develop the disease. It is known that new viruses are always born as time goes on (e.g. AIDS) and this is probably because bacteria have become increasingly resistant to antibiotics. I believe that the revolution of Science belief is a naural event which will keep to occur; as technology and human research gets more and more advanced, new scientific revolutions will take place as we find something we had never known before. Daniel Longo TOK 11th Mr. Landolfa Daniel Longo TOK 11th Mr. Landolfa ...read more.