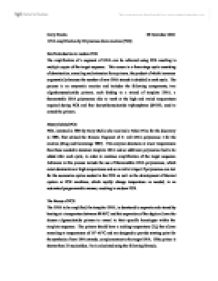 Carly Brooks 29 November 2002 DNA amplification by Polymerase chain reaction (PCR) Brief introduction to modern PCR The amplification of a segment of DNA can be achieved using PCR resulting in multiple copies of the target sequence. This occurs in a three-stage cycle consisting of denaturation, annealing and extension from primers, the product of which increases exponentially because the number of new DNA strands is doubled in each cycle. The process is an enzymatic reaction and includes the following components; two oligodeoxynucleotide primers, each binding to a strand of template DNA, a thermostable DNA polymerase able to work at the high and varied temperatures required during PCR and four deoxyribonucleoside triphosphates (dNTP), used to extend the primers. History behind PCR PCR, invented in 1985 by Kary Mullis who received a Nobel Prize for the discovery in 1993, first utilised the Klenow fragment of E. coli DNA polymerase I for the reaction (Klug and Cummings 1997). This enzyme denatures at lower temperatures than those needed to denature template DNA and so additional polymerase had to be added after each cycle, in order to continue amplification of the target sequence. ...read more.

It is also important that they are not complementary to each other at the 3' ends to ensure that primer-dimers will not form. Taq Polymerase Extension of the complementary strands from the primers by addition of nucleotides occurs at a higher temperature of between 70-75�C and needs the action of an heat stable DNA polymerase. Taq polymerase derived from the hot-springs bacterium Thermus aquaticus, which survives temperatures in excess of 85�C, was first discovered in YellowStone National Park, USA (Brock 1994). This polymerase is therefore able to withstand the high temperatures needed during the reaction. Taq has no proof-reading 3' to 5' exonuclease activity, unlike DNA polymerase I and so mismatches are incorporated at a rate of about one per 9000bp, attributed to dNTP concentration, very low or very high concentrations may result in a higher error rate and since Taq may be damaged in repeated cycling (Kocher and Wilson 1993). Higher fidelity if required can be provided by other polymerases such as Tli isolated from the bacterium Thermococcus litoralis, which provides a proof-reading activity. Tli DNA polymerase replicates DNA at 74�C catalysing the polymerisation of nucleotides in the 5'-3' direction and also possesses a 3'-5' proofreading activity, resulting in increased fidelity of nucleotide incorporation (New England Biolabs 2002). ...read more.

Taq DNA synthesis is most efficient at temperatures between 70-75�C and can reach a rate of extension between 2kb and 4kb a minute. After annealing at the required lower temperatures, extension of the primers should be carried out within this range of increased temperatures. For fragments up to 1 kb approximately a 45-second extension is sufficient, for larger fragments of up to 3 kb, an extra 45 seconds to 1 minute per kb should be allowed. PCR is most effective for fragments of about 2kb in length Number of cycles The number of PCR cycles depends on the amount of template DNA in the reaction mix, smaller amounts of template DNA should be amplified with more cycles to yield enough product, up to around 40 cycles, if the initial quantity of template DNA is higher, between 25 and 35 cycles are sufficient to create enough product in order to get good clear bands when run out during gel electrophoresis. Concluding remarks There are many factors that affect PCR as discussed, the parameters of which have to be optimised by practical experimentation, but clearly when utilised under the correct conditions, the revolutionary, fast method of amplification has provided an invaluable tool for any molecular research. ...read more.