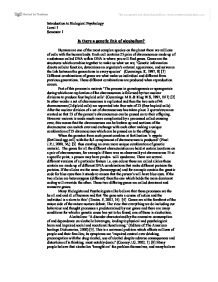 Is there a genetic link of alcoholism?

Is there a genetic link of alcoholism? Humans are one of the most complex species on the planet there are millions of cells with the human body. Each cell contains 23 pairs of chromosomes made up of a substance called DNA within DNA is where you will find genes. Genes are the structures which combine together to make us what we are, 'Genetic information directs cellular function, determines an organism's external appearance, and serves as the link between the generations in every species' (Cummings. K, 1997, 8) [1] Different combinations of genes are what make us individual and different from previous generations. These different combinations are produced when reproduction occurs. Part of this process is meiosis 'The process in gametogenesis or sporogenisis during which one replication of the chromosomes is followed by two nuclear divisions to produce four haploid cells' (Cummings M R & Klug W S, 1997, B11) [2] In other words: a set of chromosomes is replicated and then the two sets of 46 chromosomes (2 diploid cells) are separated into four sets of 23 (four haploid cells) After the nuclear division of a set of chromosomes has taken place 2 sperm/ovum are created so that 23 of the person's chromosomes can be passed on to their offspring. ...read more.

[5]. This is a universal problem which affects millions of people and their families; its symptoms are 'impaired control over drinking, preoccupation with the drug alcohol, use of alcohol despite adverse consequences and distortions of in thinking, most notably denial' (Cooney J.G, 2002, 1) [6] Many people believe that alcoholics 'brought on' the problem themselves, and many believe that the alcoholic is responsible for their problem, this is indeed true within the recovery process. On alcohol detoxification units such as that of the Smithfield Unit in Manchester there is only so much that can be done; drugs can be given to alleviate withdrawal symptoms however they do not exterminate the desire to drink and it is left to the individual to determine whether they recover or relapse. The opposing view is that shared by the support group Alcoholics anonymous who like to see alcoholism as a 'disease' to which the sufferers have no control over. Trotter and Rush were very much pioneers in the idea that alcoholism is a disease and suggested that alcoholism is a result of 'a distinct biological defect or dysfunction' (Gross.R, 2001, 113) [7] This concept of alcoholism being a disease is a little hazy and inadequate for some as Cooney points out 'in effect one is giving an alcoholic a license to drink' (Cooney J.G, 2002, 1) ...read more.

This is why psychologists and scientists alike are keen to find twins who have been adopted and reared apart, studies have been carried out on this kind of sample and the same thing was found monozygotic twins reared apart were more likely to develop alcoholism than dizygotic twins are. Another criticism of the twin studies is that a lot of the studies were carried out on males and research carried out on females has not had the same results. It is believed by many that the main causes of alcoholism are cultural, socio-economic and other environmental factors such as taxes on alcoholic beverages and exposure to alcohol in the way of alcohol advertisements. France, a country where the production of alcohol is vast and alcohol is not heavily frowned upon has a higher rate of alcohol abuse than Italy; a country similar in culture apart from the fact that alcohol is frowned upon. In contrast to this it has been suggested 'While environmental factors, such as the ease of obtaining alcohol, TV commercials and billboards advertising alcohol will not make someone an alcoholic who is not prone to it, it may encourage or trigger underage drinking, binge drinking and other problem drinking.' [12] Even though all the studies aforementioned suggest that alcoholism is genetic, they still remain a suggestion rather than evidence, as no mechanisms for genetic transmission have been found. ...read more.