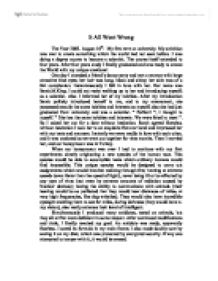 It All Went Wrong

It All Went Wrong The Year 2003. August 16th. My first term at university. My ambition was vast to create something which the world had not seen before. I was doing a degree course to become a scientist. The course itself extended to four years. After four years study I finally graduated and was ready to amaze the World with my unique creations! One day I attended a friend's dance party and met a woman with large attractive blue eyes; her hair was long, black and shiny; her skin was of a fair complexion. Instantaneously I fell in love with her. Her name was Sarah.M.King. I could not resist walking up to her and introducing myself; as a scientist. Also I informed her of my hobbies. After my introduction Sarah politely introduced herself to me, and to my amazement, she possessed exactly the same hobbies and interests as myself; also she had just graduated from university and was a scientist. " Perfect! ", I thought to myself. " She has the same hobbies and interests. We were fated to meet ". So I asked her out for a date without hesitation. Sarah agreed likewise, without hesitation I took her to an exquisite five star hotel and impressed her with my taste and manners. ...read more.

" Next I guided him around my laboratory and informed him about the project and what might befall him; soon I could seem he was becoming increasingly dismayed. I suddenly remembered something baneful, even revolting, about the antidote: if the antidote were to be inserted into the case study's bloodstream' he might become a vile beast; his blood cells would become totally transformed into millions of small and deadly parasites. However, it occurred to me in a flash if I inserted it via his brain neuro cells, Jones would probably not be affected. I gave him a solute chemical to drink which would cause him to fall asleep. After Jones had dosed off, I began to insert the antidote carefully into his brain. To carry out this procedure I had to be extremely precise to avoid injecting it into the nerves in his brain. After a couple of hours of anxious waiting the crucial moment arrived; my dream of creating a perfect human, mentally and physically, had been realized. Dagger Jones had been transformed completely: now he was everything a woman should desire in a man. Instead of being short, fat and with horrible teeth, he was tall, dark and handsome; his body was fit and muscular. ...read more.

I am going to kill you anyway! I will kill you! I will first dismember your body, then stamp and spit on it. After that I will feed it to the dogs! " He dashed at me suddenly with a huge knife but I quickly launched a bottle of Hydrochloric Acid combined with Ammonium Nitrate straight at him. As the highly acidic mixture immediately destroyed all the parasites in his body; normal blood cells replaced them. Without knowing, involuntary, I had cured Dagger Jones! I walked in a daze towards the door leading to the house and there in front of my eyes lay the crumpled body of my beloved wife. I turned deliberately with all the anger accumulated inside me, dashed towards Dagger Jones and stabbed him brutishly several times he also until he lay in a broken heap on the floor, with all the blood drained from his body. The Police, of course, came and arrested me for the offence I had committed. They followed the trail and I was next convicted of murdering Dagger Jones. This is the story of my life from beginning to end; in between it all went wrong! I have only a little time left before my execution. Was I right or wrong to murder Dagger Jones? It all went wrong!!! [THE END] IT ALL WENT WRONG WRITTEN BY HAYAT MUNIR @ 18/10/00 ?? ?? ?? ?? ...read more.