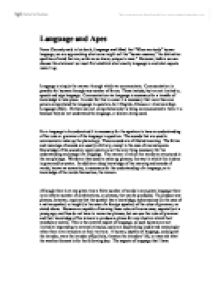 Language and Apes Noam Chomsky said in his book, Language and Mind, that "When we study" human language, we are approaching what some might call the "human essence," the distinctive qualities of mind that are, so far as we know, unique to man." However, before we can discuss this statement we must first establish what exactly language is and what aspects make it up. Language is simply the manner through which we communicate. Communication is possible for humans through any number of forms. These include, but are not limited to, speech and sign language. Communication via language is necessary for a transfer of knowledge to take place. In order for this to occur it is necessary that more than one person comprehend the language in question, be it English, Xhousa or American Sign Language (ASL). If others can not comprehend what is being communicated to them it is because they do not understand the language, or dialect, being used. For a language to be understood it is necessary for the speakers to have an understanding of the rules or grammar of the language in question. The sounds that are used to communicate make up the phonology. These sounds are attributed meaning. The forms and meanings of sounds are usually arbitrary, except in the case of onomatopoeia. Knowledge of the sound (or sign) system is not the only thing necessary for the understanding and usage of a language. ...read more.

While there are hundreds of thousands of words in the English language, the vervet monkey has only about thirty. The next aspect is known as tradition. Is the language taught or is it learnt from others. A human child kept in isolation will not pick up English, or any other language for that manner. This may be because the child does not need to communicate with anyone simply because there is no one to communicate with. Birds on the other hand will develop bird-song in isolation. The bird-song will be abnormal, but it will recognisable. It appears that the communication systems of many animals are genetically in-built, in that they do not have to be in the presence of others for it to be triggered or learnt. Humans are known for beginning conversations about various topics, be it the weather to asking for directions. On the other hand, other animals only communicate when there is a reason, i.e. their communication is dependant on stimulus, e.g. a danger call by the vervet monkey. This is aspect is not however, unique to humans, . Humans also usually take tuns speaking or signing, as do birds. Humans also use double articulation, and once again so do birds. What does appear to be unique to humans is structure, and a dependence on that structure for the communication to be understood. ...read more.

In addition there was no turn taking, no real conversation. In the case of apes that used symbols to communicate, there is evidence of creativity, semanticity and displacement, but little evidence of an mastery of structure-dependant operations. Although two chimps have learnt that when one of them presses a symbol the other can collect the object that is represented by that symbol. Although an impressive piece of communication, it is no different to the trainers filling in the role of one or the other animal since neither of the animals conversed simply in order to converse. This trait is apparent in all apes. Although the apes did assimilate some of the aspects that make up language, they did so in a rudimentry and limited fashion. In addition no ape was cognisant with all of the rules of grammar discussd at the beginning of this essay, subconsciously or consciously. The human manner of speech seems unnatural for the ape and a great deal of effort is necessary to obtain limited results. It is also apparent that apes do not need a sophisticated system of language to be apes, but that for humans to be humans, we do. As such it appears that apes, along with the rest of the animal Kingdom, excluding humans, cannot "speak" as humans can. We must then ask why this is so and perhaps consider why it is that we seem to be unique in that we can communicate just for the sake of talking. Perhaps Chomsky is correct. ...read more.