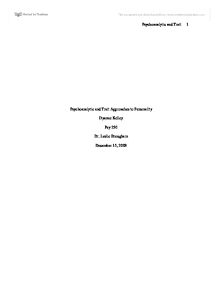 Psychoanalytic and Trait Approaches to Personality There are several different aspects of analyzing a persons personality. No two people will be the exact same.

Psychoanalytic and Trait Approaches to Personality Dyanne Kelley Psy 250 Dr. Leslie Brougham December 15, 2008 Psychoanalytic and Trait Approaches to Personality There are several different aspects of analyzing a person's personality. No two people will be the exact same. One theory, the psychoanalytic approach, states that the traits of a person's personality are directly related to his or her unconscious mind. On the other hand, the trait approach suggests that personality constant and reoccurring characteristics define personality. Each theory presents a host of valuable information when assessing someone's personality. One major theory of lifespan development that appeals to me is Freud's Personality Theory. Sigmund Freud's theory both describes the complex functioning of the adult personality and offers an explanation of the processes and progress of its development throughout childhood (Blewitt & Broderick, 2006). Through use of the id, ego, and superego, Freud explains three major functions of the human psyche: the pleasure principle, the reality principle, and a "bridge" to keep the two in check. ...read more.

During this stage (ages 0-18 months), Freud says that the mouth, lips, and tongue are primary areas that stimulate s****l desire. At this age, children have the need to put everything in their mouths (Burger, 2008). The development of an oral personality or fixation may be caused by trauma experienced during this oral stage (i.e., feeding problems). Adults with oral personalities are often dependent of others. Freud suggests that if the fixation or trauma occurs after the child has teeth, he or she may show excessive aggression as an adult (Burger, 2008). Some examples of oral fixations are as follows: smoking, gum chewing, and the constant need to have something in the mouth. The second stage of Freud's Psychosexual Stages of Development is the a**l stage. The a**l stage (ages 18 months - three years) is the time when most children are potty trained. During this stage the a**l region becomes the most erogenous area. Freud believed that an upsetting toilet training experience could lead to an a**l personality (Burger, 2008). ...read more.

I am always energetic and optimistic. Between the psychoanalytic and trait theories, I would have to say that the trait theory is the one that best describes me. In almost every situation I am the same. I like everything to run smoothly, but if something were to arise I am always willing to come to some type of compromise to get things accomplished. I always approach a situation in an optimistic manner. I can never hold a grudge and will always listen and take into consideration the other side of the story. All of the personality theories, to a certain extent, have some truth to them and they have provided a more complete picture of human development, whether one agrees with each individual theory, or not. Sigmund Freud, the father of psychology, has greatly influenced the way we look at psychology today. His theory of personality provides the cornerstone for many other theories to follow, either in agreement or rejection of his. Further, he gave the impression of the individual being primarily driven by s****l needs and desires, and nothing else; he reduced and made the individual simple and not complexly structured. ...read more.