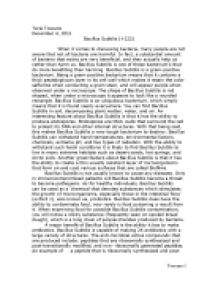 The benefits of bacillus subtilis

Bacillus Subtilis does have the ability to contaminate food, very rarely is food poisoning a result from it. When examining food for possible Bacillus Subtilis contamination, you will notice a sticky substance (frequently seen on spoiled bread dough), which is a long chain of polysaccharides produced by bacteria. A major benefit of Bacillus Subtilis is the ability it has to make antibiotics. Bacillus Subtilis is capable of making 24 antibiotics with a large variety of structures. The anti-microbial active compounds that are produced include: peptides that are ribosomally synthesized and post-transitionally modified, and non- ribosomally generated peptides. An example of a peptide that is ribosomally synthesized and post-transitionally modified (also known as Lambiotic) is Subtilin. Subtilin is a peptide antibiotic of 32 amino acids that is known to protect against gram-positive bacteria and various pathogenic fungi. An example of a peptide antibiotic that is non-ribosomally generated would be Bacitracin. ...read more.

Also, In 1999, New York City conducted an experiment to test the vulnerability of their subway system to biowarfare. Researchers released the harmless, Bacillus Subtilis into their subways to see how fast it grew and where it traveled. The results of this experiment was that New York?s underground subway system is very vulnerable due to the winds and the vacuums created by the passing subway trains, and if a bacteria (especially an endospore forming bacteria such as anthrax) was released in just one subway, all trains will be in danger. Without this experiment NYC would not have been aware of how high of a threat their underground systems are, and what they can do to help quarantine biowarfare if ever exposed in their subway systems. In conclusion, Bacillus Subtilis is quite an extravagant bacterium. With its ability to be used as an antibiotic, fungicide, or used to decompose explosive into harmless matter, chances are that at some point in time you would have used a substance that contains this bacteria. ...read more.