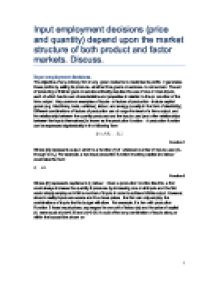 An argument against optimum currency areas (OCA) is that the single currency and the common interest rate used in an OCA would mean one-size-fits-all monetary policy. Explain this argument, and consider whether and under what condit

Input employment decisions (price and quantity) depend upon the market structure of both product and factor markets. Discuss. Input employment decisions. The objective of any ordinary firm in any given market is to maximise its profits. It generates these profits by selling its produce- whether it be goods or services- to consumers. The act of producing a finished good or service ordinarily requires the use of one or more inputs, each of which has its own characteristics and properties in relation to the production of the firms output. Very common examples of inputs- or factors of production- include capital goods (e.g. Machinery, tools, vehicles), labour, and energy (usually in the form of electricity). Different combinations of factors of production can change the level of a firms output, and the relationship between the quantity produced and the inputs used (and often relationships between the inputs themselves) is known as the production function. A production function can be expressed algebraically in the following form: Function 1 Where (Q) represents output, which is a function (f) of whatever number of inputs used (X1 through to Xn). For example, a two input production function involving capital and labour could take the form: Function 2 Where (K) ...read more.

Since profit maximising firms produce where marginal revenue is equal to marginal cost, a monopolist can earn supernormal profits by producing where marginal revenue equals marginal cost because of the difference between average and marginal cost (which to a competitive firm is the same). A monopolist therefore has an incentive to restrict quantity produced and raise price. The effect of a higher price of labour (wage or salary) as a result of monopoly in labour supply is shown in Figure 4. In the instance of labour, a 'closed shop' trade union can become a monopoly supplier of labour, limiting competition and driving up wages/salaries. Figure 4 The increased price of labour is reflected in a change in the isocost curve, i.e. less labour can be afforded. In this case, I have doubled the cost of labour from 0.25 to 0.5, causing a reduction into the maximum quantity of labour that can be afforded (referred to as Lmax). The price of capital remaining constant, the isocost line shifts to show the new area of combinations that can be afforded. The result in this instance, is that the isocost line is now tangential to a new isoquant where Q=4. The severity of the impact of an increase in one factor price on possible output depends upon the slope of the isoquants and the size of the increase. ...read more.

Figure 7 Figure 7 shows the effect of monopsony power in a factor market (again using labour as an example). The decrease in the price of labour leads to a shift in the isocost curve. Conclusion The examples above have shown that input employment decisions are indeed affected by the market structure of product and factor markets. More competitive factor markets tend to yield more output while less competitive markets restrict it, which through the price mechanism, has a knock on effect upon input employment decisions through income and price effects on the isocost line. The structure of product markets also impacts upon input employment decisions since more and less competitive markets have different profit maximising levels of output. In reality however, not all models are as simplistic as the ones suggested here. For example, often monopoly power in product markets would also suggest some degree of monopsony power in factor markets, meaning that the overall effect depends upon a combination of different forces which could either compliment or contradict each other. Price and income effects are similarly sometimes much more complex; some production functions might mean demand for factors are more or less responsive to changes in price. The general however the basic principles outlined still apply, that more competitive product and factor markets tend to encourage higher output and therefore input employment, while less competitive markets tend to restrict these quantities. ...read more.