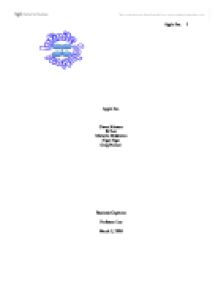 Apple Inc. Gwen Johnson SJ Lee Michelle Middleton Nigel Ngai Greg Palmeri Business Capstone Professor Lee March 5, 2008 Executive Summary Apple Inc. is a company that designs, manufactures, and then sells desktop and notebook computers, portable digital music players, and cell phones. It also creates software like the OS X operating system, iLife, iTunes, or QuickTime; and peripherals such as printers or storage devices that go with these products. The biggest challenge Apple is facing is that consumers are reluctant to pay for songs and thus, Apple is losing customers to its competitors who are offering music at a lower price. This can be seen in increased piracy and code hackers. We came up with two possible solutions to address Apple's challenges. The first is to create a streaming music system. Using the currently existing streaming music program, customers can choose stations from different music categories. With a more personalized system they could choose stations that play music similar to an artist they already like. While the streaming music is playing customers would have the option to buy the song as well. The second option is to open up their music file sharing program with an all encompassing price. Apple stands to benefit significantly in the future from building a closed community with artists and consumers which will enable the company to compete more aggressively with record companies while also building a closed network which minimizes hacker risk. The second option of the closed community solves the main issues faced by Apple, like the loss of customers to competitors and dealing with illegal downloads from consumers, which is why we found this to be the best option for Apple to pursue. Its overall purpose is to deliver a competitive music package with top security, which adds value and significant competitive advantage to Apple's current processes. Table of Contents 1. The Strategy of Apple Inc. ...read more.

Apple has patents not only in their operating system and software, but also in the technology that allows monitors to record video of their viewers at the same time as displaying visual output in their computer products. They also have an integrated system with iPod and iTunes to allow the users to easily utilize both products. These resources are definitely rare as Apple hold patents, preventing other companies from using such technologiesx. The Question of Imitability: Do others companies without the resources or capabilities face a cost disadvantage in obtaining or developing Apple's resources? Apple is already holding the patents and copyrights in their technologies and designs. Since the patent extends to Apple the right to legally pursue any company that violates its intellectual property, companies are unlikely to engage in using this technology without permission for fear of significant amounts of money that could be paid out in damagesxi. The Question of Organization: Is Apple Inc. organized enough to exploit the full competitive potential of its resources and capabilities? Apple has a reputation for being a creative company and has the required procedures and practices in place to support the proper use of technology as a strategic resource. Apple Inc. has especially defined innovation and design activities as being of higher importance than the commercial aspect. Innovation and design have been at the core of Apple and its organization since its start, which increases the chance of the competitive advantagesxii. Table 2 Assessment of the Apple Inc.'s Internal Capabilities Are the Resources or Capabilities: Valuable? Rare? Costly to Imitate? Exploited by Organization? Competitive Advantages Yes Yes Yes Yes Sustainable Taken together, the analysis of Apple Inc.'s internal capabilities suggests that it is valuable, rare, costly to imitate, and organized to exploit opportunities. According to the result of this assessment, Apple Inc. is sustainable as long as it preserves and develops these competitive advantages in the industry, which requires being continuously innovative. ...read more.