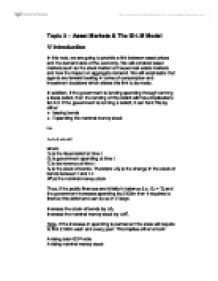 Topic 5 - Asset Markets & The IS-LM Model 1/ Introduction In this note, we are going to provide a link between asset prices and the demand side of the economy. We will consider asset markets such as the stock market or house/ real estate markets and how the impact on aggregate demand. We will emphasize that agents are forward looking in terms of consumption and investment decisions which allows this link to be made. In addition, if the government is funding spending through running a fiscal deficit, then the funding of this deficit will have implications for AD. If the government is running a deficit, it can fund this by either * Issuing bonds * Expanding the nominal money stock i.e. where Dt is the fiscal deficit at time t Gt is government spending at time t Tt is tax revenue at time t Bt is the stock of bonds. Therefore ?Bt is the change in the stock of bonds between t and t-1. Mst is the nominal money stock Thus, if the public finances are initially in balance (i.e. Gt = Tt) and the government increases spending by �100m then it requires to finance this deficit and can do so in 2 ways Increase the stock of bonds by ?Bt Increase the nominal money stock by ?Mst Note. If the increase in spending is permanent the state will require to find �100m each and every year. ...read more.

The argument is quite simple. Eventually the debt incurred will have to be repaid which will involve, ceteris paribus, increased taxation. Barro argued that rational agents would thus increase savings - reduce current consumption in order to meet the inevitable future tax increases. This so called Riccardian equivalence theorum suggests that deficit financed fiscal expansion will be unable to stimulate an economy and that the effects on aggregate demand will be neutral or perverse. (see accompanying handout). Most mainstream economist would reject the view that deficit financed fiscal measures will have no real effects, at least in the medium term. 5/ Wealth Effects and The Money Market It can be argued that as wealth increases, so too will money demand for both transactions and precautionary purposes. This has the effect of increasing MD at all rates of interest. i.e. the MD curve shifts out as wealth increases. Given a fixed money stock, this engenders leftward shifts in the L-M function as wealth increases. If this were the case, wealth effects would be causing the I-S curve to shift to the right whilst the L-M curve was simultaneously shifting in. In this case, a bond financed permanent deficit could theoretically result in lower output than prior to the fiscal stimulus. Such an effect would result in a spiral of decreasing real output unless the deficit financed stimulus was accompanied by an expansionary monetary policy. ...read more.

If lax monetary and or fiscal policy are intended to engender a boost to activity, they may engender an unsustainable boom as consumer and business confidence and investor sentiment amplify the intended policy effect. A good case in point is the UK in the late 1980's. Lax monetary and fiscal policy expanded demand which engendered high consumer and business confidence which amplified the policy effects. The strong trend in demand boosted house prices, particularly in the south which further boosted wealth and consumer confidence. In addition, there was a buoyant stock market which served to increase consumption, investment and confidence. The authorities were convinced that the supply side reforms previously introduced would allow the economy to grow at a faster rate than previously without the emergence of the twin inflationary effects of price inflation and a deteriorating trade balance. This notion proved unfounded and by 1988, the government was forced to tighten policy. This led to faltering output, falling confidence and a slowing and eventual fall in house prices. These adverse demand, confidence and wealth effect eventually resulted in falling output and a prolonged recession. Even when activity and house prices began to recover low consumer and business confidence kept output weak and confounded any attempt to boost the economy by fiscal means. Arguably, experience of trying to steer a noisy economy led policy makers from an activist perspective and led to the adoption of a policy of using demand policy to target inflation within the context of fiscal rules. ...read more.