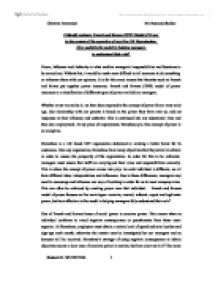 Critically evaluate French and Ravens (1959) Model of Power in the context of the operation of any One UK Organisation. How useful is the model in helping managers to understand their role?

Critically evaluate French and Ravens (1959) Model of Power in the context of the operation of any One UK Organisation. How useful is the model in helping managers to understand their role? Power, Influence and Authority is what enables managerial responsibilities and functions to be carried-out. Without this, it would be much more difficult to tell someone to do something or influence them with our opinions. It is for this exact reason that theorists such as French and Raven put together power resources. French and Ravens (1959) model of power resources is a classification of different types of power available to managers. Whether or not we realise it, we have been exposed to the concept of power from a very early age. Our relationship with our parents is based on the power they have over us, and our responses to their influence and authority. This is continued into our educational lives and then into employment. At my place of employment, Homebase plc, this concept of power is no exception. Homebase is a UK based DIY organisation dedicated to creating a better home for its customers. Like any organisation, Homebase have many objectives that they strive to achieve in order to ensure the prosperity of the organisation. In order for this to be achieved, managers must ensure that staff are carrying-out their roles and responsibilities correctly. This is where the concept of power comes into play. As each individual is different, we all have different ideas, interpretations and influences. Due to these differences, managers may need to encourage and influence our way of working in order for us to meet company aims. This can often be achieved by exerting power over that individual. French and Ravens model of power focuses on five main types: coercive, reward, referent, expert and legitimate power, but how effective is this model in helping managers fully understand their role? ...read more.

It is essential that managers understand the limitations of legitimate power in their roles if we are to continue to use power in organisations. Abuse of legitimate power in this way may result in power being ignored completely. Referent power is where an individual conforms due to their identification with someone or their attraction towards them. This type of power can be seen as hard to administer as the subordinates must feel attracted to the managers and want to be identified with them. `Advertisers take advantage of this type of power when they use celebrities, such as movie stars or sports figures, to do testimonial advertising.' (Lutmans, 1995) This is true in the case of Homebase. Homebase attract customers via their television advertisements. For a few years now, the celebrities deployed at attracting customers to the stores has been Lesley Ash and Neil Morrisey. The use of referent power in this advert is very powerful and therefore is very effective for Homebase in attracting customers to the store. However, the use of referent power in this situation can also have a negative effect on Homebase if for example, Lesley Ash or Neil Morrisey had some unwanted publicity surrounding them. French and Ravens referent power may therefore not be as consistent and can be prone to sudden changes of effectiveness due to a subordinates changing opinion of a manager for example. As in all of French and Ravens Power resources, the sources are dependent on the perceptions of the individuals at which the power is aimed at. Nevertheless, in respect of expert power this is even more important. Going back to our school days, teachers often exhume a great deal of this type of power due to their extensive knowledge of a particular area/subject and as they are seen as a credible source. In organisations, things are not much different. Homebase have departmental managers in charge of different departments within the store from the garden centre to the DIY department. ...read more.

Thirdly, power put forth from managers can be personal or positional. French and Ravens model does not take either into account. This can again be seen as a problem of interpretation due to the lack of content. As French and Ravens model shows no indication of where the power resides from, managers are no clearer as to whether or not to exert power from a personal perspective or a positional perspective. This can lead to unfortunate incidents of bullying due to coercive power for example being displayed via physical strength as opposed to hierarchal status. French and Ravens model of power is well known and used in many organisations, despite other models such as Colin Hales providing other interpretations of power resources. This says a lot about the model. Not only does it appear effective but useful to managers to want to continue to use French and Ravens typology. But that is just it, it is only a typology. There is nothing set in stone saying that this model is ideal. It is difficult to establish whether or not the model helps managers to understand their role. To a certain extent, it does help managers. Their everyday roles such as their need to negotiate, control and problem solve is effective dependent on whether or not the correct power is exerted and held. Managers therefore understand the importance of them using their role of negotiation to administer the correct reward suitable for an employee. On the other hand, the model does not relate to the role of managers. It is therefore up to the manager whether their role is better understood due to the model. To conclude, French and Ravens model has stood the test of time. Despite my critical analysis, it is still used today and likely to be the model used in the foreseeable future. In terms of its usefulness, it again boils down to a managers perception of the model and how they use the power resources to meet their needs as well as the needs of the organisation. ...read more.