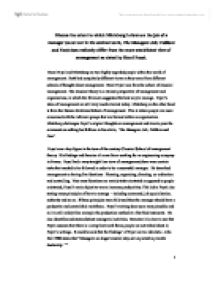 Discuss the extent to which Mintzberg's views on the job of a manager (as set out in his seminal work, The Managers Job; Folklore and Fact) does radically differ from the more established view of management as stated by Henri Fayol.

Discuss the extent to which Mintzberg’s views on the job of a manager (as set out in his seminal work, The Managers Job; Folklore and Fact) does radically differ from the more established view of management as stated by Henri Fayol.

Fayol was a key figure in the turn-of-the-century Classical School of management theory.  His findings and theories all came from working for an engineering company in France.  Fayol had a very straight-line view of management; there were certain tasks that needed to be followed in order to be a successful manager.  He described management as having five functions:  Planning, organising, directing, co-ordination and controlling.  Note most functions are mainly task-orientated as opposed to people orientated; Fayol’s main objective was to increase productivity. This led to Fayol also stating many principles of how to manage – including command, job specialisation, authority and so on.  If these principles were followed then the manager should have a productive and controllable workforce.  Fayol’s writing does seem very plausible and as it is still widely fore example the production method at a fast food restaurant.  He also identifies and states distinct managerial activities.  However it is clear to see that Fayol assumes that there is a compliant work force; people are not talked about in Fayol’s writings.  It could be said that the findings’ of Fayol are too idealistic. John Ball 1998 states that “Managers no longer control, they are expected to provide leadership.” ¹

In contrast Mintzberg had conducted research on managers from many different fields of industry, in the article: The Managers Job; Folklore and Fact’ from presidents to gang leaders.  This is a major contrast to Fayol who only looked at managers within this organisation and based on his own personal experience.  It could be seen that Mintzberg studying horizontally i.e. the same level of manager across different industries but Fayol studied vertically.  Mintzberg’s views are seen as being much more realistic in the world of management.  Mintzberg entered his research with an open mind, he wanted to find out what best suits the managers and this explains his research.  Mintzberg found that there are many different roles with in a manger; managerial roles, decision roles and perhaps more importantly informational roles.  Mintzberg criticises Fayol’s findings, and in his article ‘The Managers Job; Folklore and Fact’. (1973) states that:

“My intention in this article is simple: to break the reader away from Fayol’s words and introduce him to a more supportable and I believe a more useful, description of managerial work.”

The first ‘folklore’ out of the four ‘myths’ Mintzberg discuses is that an effective manager must be a ‘reflective and systematic planner’.  Fayol describe planning as one of the main functions of management.  It seems to have good ecological validity, because manager should have a systematic plan.  However Mintzberg after conducting his research found that actually a mangers life is very busy and sometimes chaotic.  There is very little time for systematic planning.  As stated once before Fayol had a straight line view that was fairly inflexible, it was assumed all went to plan and that there would be no problems. Mintzberg (1975) found in a study of fifty-six US Foremen had ‘583 activities per eight hour shift, an average of one every forty-eight seconds’.  This led Mintzberg to believe that mangers were ‘orientated to action’ and not reflective tasks such as planning.  Similarly John Ball follows this by stating ‘that in the business world of the twentieth century managers actually do little or no planning’.  Mintzberg believes that the environment effects the organisation, where as Fayol did not agree.  This is why Mintzberg’s mangers did not like planning as the environment is changing, problems always arise. Planning was needed for the unforeseen circumstances and no other reason, contingency planning.

The second myth that Mintzberg discuses is that an effective manger has no regular duties.  The classical school of thought is that managers should delegate meaningless and medial tasks. This was again strongly argued by Mintzberg who with a lot of research seems to disprove Fayol’s initial thoughts.  Mintzberg’s research showed this is not the case, and a small workforce will sometimes mean a manager will have to do jobs that could be seen as beneath him.  Information is a key concept that keeps cropping up in Mintzberg findings.  One belief is that managers need to hold general meetings to gather information.  To fit in with the informational roles of a manger, one would have to spend time with external associates.  Only the manager can talk too because of this position, he needs to monitor press daily and share his information with employees and outsiders.  Mintzberg states that the majority of managers need to keep information in there head and not on a piece of paper. From past experience sometimes managers do have to work as a cashier or stack selves.  Regular duties do sometimes have to be preformed by the manager.  However this keeps the organisation running efficiently and therefore he or she is still an effective manager.

Following on from the myth above is the folklore that ‘mangers need aggregated information, which a formal management information system will provide.’  Fayol along with fellow classical school of management believers thought a hieratical system would provide all the information that is needed.  However Mintzberg found that this was just not the case and managers later were not using the MIS, it became not existent.  Managers seem to prefer verbal communication which includes meetings and telephone conversations.  Even listening to office gossip was a good source of information for managers. Mintzberg stated “Managers seem to cherish "soft" information, especially gossip, hearsay, and speculation.”  Verbal conversations is a two way process and the other party has to listen, whereas mail tends not to be read and just processed away.  If there is some important information to be given it will almost certainly too given orally possibly followed up on paper work.  Fayol did not spend a lot of time talking about communication. This is possibly because of the time of this writing communication was not so greatly needed.  There was no such thing as email; even telephone calls were hard to come by in Fayol’s time.  A general increase in technology can be seen to increase the communication rates.  Globalisation is taking over and the growth of Multi National Corporations is increasing.  Communication is greatly needed to help these companies continue.

The final myth is that ‘management is quickly becoming a science and a profession.’  As stated Fayol believed that there was a set way for managers to work. ‘They had to follow consistent set of principles that all organisations need to run properly.’²  This meant that if a student of management learnt all of Fayol’s principles they effectively would be an outstanding manager, hence you could have a profession as a manger. What we generally find is that managers usually have their own profession.  A headmaster is a manger however I’m sure his profession would be a Teacher.  In contrast though we are stating to see the development of ‘super managers’ somebody like Richard Baker (formally the trading director at ASDA and now chief executive at Boots PLC) who could possibly be placed as the managing director of nearly any industry and succeed.  For this role people skills would have to be immense and information links again would have to be great.  Different situations require a different response from the manager.  If you do not know how to motivate your work force you will not be successful.  This is one reason why Mintzberg focuses his work a lot about the people.  Due to his research Mintzberg identifies the fact people need to be motivated, and there are different kinds of people that have different goals. There is not one set of motivational skills but many. The type that needs to be implemented will depend on the manger, the workforce and the environment.

Fayol and Mintzberg have their criticisms, Fayol was an insider, he conducted research in his own company.  This could of lead to biased views however the work force may have acted normally because Fayol was always there.   This differs from Mintzberg as although he was an outsider who suggestions could be less biased but managers may have acted differently due to his presence.  It would be very hard to gain full access to Richard Bakers life for example.  The manager that Mintzberg describes may well fit into Fayol’s manager however as sometimes the work place can be chaotic the manager has to be versatile.  Both could be saying the same thing however Mintzberg seems to concentrates on and develops Fayol’s points.  It is hard to ignore the vital significance Fayol’s views still have on management today.  As we are becoming more aware through studies and research the work force do matter and this is why Mintzberg was more people-orientated.  I believe that Mintzberg views on the job of a manger do not differ to a great extent from that of Fayol’s.