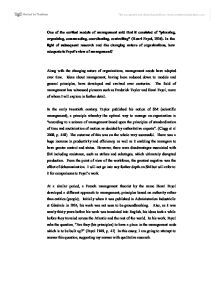 One of the earliest models of management said that it consisted of &quot;planning, organizing, commanding, coordinating, controlling&quot; (Henri Fayol, 1916). In the light of subsequent research and the changing nature of organizations, how adequate is Fayol's vie

One of the earliest models of management said that it consisted of "planning, organizing, commanding, coordinating, controlling" (Henri Fayol, 1916). In the light of subsequent research and the changing nature of organizations, how adequate is Fayol's view of management? Along with the changing nature of organizations, management needs have adapted over time. Ideas about management, having been reduced down to models and general principles, have developed and evolved over centuries. The field of management has witnessed pioneers such as Frederick Taylor and Henri Fayol, more of whom I will explore in further detail. In the early twentieth century, Taylor published his notion of SM (scientific management); a principle whereby the optimal way to manage an organization is "according to a science of management based upon the principles of standardization of time and routinization of motion as decided by authoritative experts". (Clegg et al 2008, p. 458) The outcome of this was on the whole very successful. There was a huge increase in productivity and efficiency, as well as it enabling the managers to have greater control and status. However, there were disadvantages associated with SM including resistance, such as strikes and sabotages, which ultimately disrupted production. From the point of view of the workforce, the greatest negative was the effect of dehumanization. I will not go into any further depth on SM but will refer to it for comparisons to Fayol's work. ...read more.

(Roberts, J. 1984, p. 292) McGregor's Theory X and Y moves away from the idea of a single solution to managing and is known as a 'contingency approach' to management. They build on different assumptions but fail to recognize that these may be self-fulfilling. I believe that Fayol recognized that managers' role was not just to control and command employees but also included allowing them to use their own initiative and in some way empower them: "The manager must be able to sacrifice some personal vanity in order to grant this sort of satisfaction to subordinates. Other things being equal, moreover, a manager able to permit the exercise of initiative on the part of subordinates is infinitely superior to one who cannot do so." (Fayol 1949, p. 40) In today's society, organizations exist in a wide variety of structures, sizes and operations. Managing is an art form and not science. It involves getting things done though people as a very large proportion of managers' time is spent talking to various people in different environments. Also, studies have found that managers infrequently command their subordinates, especially higher up the organizational hierarchy one goes. As a result, they are constantly on the move with work being fragmented. (Watson T. 2006, p. 172) With the additional affect of globalization and subsequent mergers across national boundaries, managers have to adapt their role. ...read more.

Associated with this is the idea of 'charisma' and the effectiveness of storytelling lies not just with the leader but with the 'followers' and how 'the story' fits in with the situation. In addition, with the existence of roles and skills, that does not mean that there is only one way to lead. Different styles of leadership have been identified by behavioural studies. To summarize, my conclusion is that the role of future managers will have a greater number of components and the number of managers may decrease, for example, as a result of downsizing, but they will still be present in the foreseeable future. Returning back to the start of this essay and Fayol's work, I believe that he recognized that his components and principles were subject to change and not exhaustive. At that period, they were a useful tool to raise and develop management theories which he thought were important: "There I bring to an end this review of principles, not because the list is exhausted-this list has no precise limits-but because to me it seems at the moment especially useful to endow management theory with a dozen or so well-established principles, on which it is appropriate to concentrate general discussion.... Are they to have a place in the management code which is to be built up?" (Fayol 1949, p. ...read more.