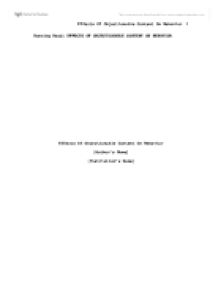 Running Head: EFFECTS OF OBJECTIONABLE CONTENT ON BEHAVIOR Effects Of Objectionable Content On Behavior [Author's Name] [Institution's Name] Effects Of Objectionable Content On Behavior Since the availability of contents that are objectionable, there has been finger pointing and blame casting centered on the professed role of media in encouraging or fostering objectionable behavior. For example, following countrywide protest encouraged by Columbine High School shooting on April 20, 1999, by which public interest seized on information that the two adolescent perpetrators had appeared the fans of the rated-M-for-mature video game Doom and notorious rock star named Marilyn Manson (Greenspan, 1999). The issue whether or not "the media influence them to do it" did not start with the incident of Columbine High School and nor did it finish with their- inexhaustible debate over such content in media that is objectionable and its affect on adults and children has much bottomless roots and persist today. Public statistics such as best recording artist Marshall Mathers (2000) and selling novelist named Stephen King (1999), between other stars have announced in reaction to public accusations that their work has affects teenagers to commit incidents of violence that are schools associated. ...read more.

Guggenbuhl noted, instead, violent and aggressive media more frequently operates to civilize violence and affects adolescents to act in response with greater understanding. Contrary to idea that a media culture established in objectionable matter influence morals of children, Guggenbuhl also provided that, very small numbers children are enthused to mirror representation. More recently, Mrug, Loosier, and Windle (2008) researched the impact of violence within home, school and society environments and its connection with youths' predispositions toward committing violent acts. The writers discovered that disclosure to aggression can result in a breakdown of mental health in adolescence. According to the writers, this worsening can be an issue in the development of psychopathological diseases, such as despair, which can possibly affect violent behavior among kids or young people. The question extends whether disclosure to portray violence in movie, lyrics, or video gaming environments carries the same harmful effects as disclosure to real-life violence in the home or somewhere else in a child's physical environment. The question remains to other objectionable content, containing portrayals of promiscuity or drug use. As Vivian (2009) notes, indecent content has long been a foundation of debate in federal and legal rules, as symbolized by a case engaging ...read more.

entreated his viewers to realize, the thoughts and actions of people do not reflect the media-the media reflects the thoughts and actions of people. King's affinity for the wounds of adolescence infuses his work: "That I feel shame for these bogey boys should shock no one; I have been drawn many times to tales of the powerless and disenfranchised young". In spite of continual asserts that objectionable content is detrimental to ethical character, no stalwart evidence exists to solidify relations between media effects and unwanted behaviors. That Mathers' music or King's literature or Grand Theft Auto's gaming platform should be present in the control of performers should not work as circumstantial proof of media's blame in the perpetrators' offenses. These items are also presented in the hold of millions of users who do not involve in dangerous, degenerate behavior. The origins of violence and other detrimental behaviors might well be reflected in media, but the causes exist autonomously of their portrayals. Adult themes of aggression, promiscuity, and content abuse impact several children and grownups on a level much more personal than the computer or TV screen; several are content to these effects via direct experience and disclosure. Without the objectionable substance of real life to draw upon, there would exist no stimulation for objectionable substance in media. ...read more.