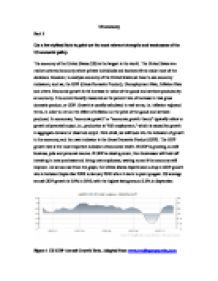 Evaluating the Health of the US economy. Analyse the macroeconomic policies of the Bush and Obama administrations.

US economy Part I Use a few stylized facts to point out the most relevant strengths and weaknesses of the US economic policy. The economy of the United States (US) is the largest in the world. The United States is a market-oriented economy where private individuals and business firms make most of the decisions. However, to analyze economy of the United States we have to see economy indicators, such as; the GDP (Gross Domestic Product), Unemployment Rate, Inflation Rate and others. Economic growth is the increase in value of the goods and services produced by an economy. It is conventionally measured as the percent rate of increase in real gross domestic product, or GDP. Growth is usually calculated in real terms, i.e. inflation-adjusted terms, in order to net out the effect of inflation on the price of the goods and services produced. In economics, "economic growth" or "economic growth theory" typically refers to growth of potential output, i.e., production at "full employment," which is caused by growth in aggregate demand or observed output.Owe First of all, we will look into the indicator of growth in the economy; and the main indicator is the Gross Domestic Product (GDP). The GDP growth rate is the most important indicator of economic health. If GDP is growing, so will business, jobs and personal income. If GDP is slowing down, then businesses will hold off investing in new purchases and hiring new employees, waiting to see if the economy will improve. As we can see from the graph, the United States experienced a drop in GDP growth rate in between September 2008 to January 2010 when it starts to pick up again. US average annual GDP growth is 2.8% in 2010, with the highest being around 3.3% in September. Figure 1 US GDP Annual Growth Rate. Adopted from www.tradingeconomics.com Figure 2 GDP Annual Growth Rate. Adopted from www.tradingeconomics.com If we look at the Real GDP however, it shows a growing trend. ...read more.

Following the Economic Growth and Tax Reconciliation Act of 2001 and the Jobs Growth and Tax Relief Reconciliation Act of 2003, federal tax receipts did not rise substantially until 2005 when tax receipts increased from $1.388 trillion to $2.153 trillion according to the Urban Institute's and Brookings Institution Tax Policy Center. Since 1944, federal tax receipts have ranged between 14-21 percent of GDP, the same range held during the Bush era also according to the tax center. (Berry, 2011) Several types of tax cuts were instituted during the terms of President George Bush. The 2001 tax law lowered individual income tax across all income levels, in addition to gradually reducing estate taxes and increasing the child tax credit. The 2003 tax legislation aimed successfully reduced dividend taxes by 20 percent and the top income level of capital gains tax by 5 percent. Although several Bush era tax cuts were sought to be permanent, expiration dates on the provisions were set to occur between 2008-2010. However, when President Barak Obama signed the Tax Relief, Unemployment Insurance Reauthorization, and Job Creation Act of 2010, the Bush era tax cuts were given new life and extended. For example, the Accounting firm Cherry, Baekaert and Holland report that the child tax credit, long-term capital gains tax, dividend tax rates and income tax had all been extended by two years. Tax policy is a hotly debated issue, and the Bush era tax cuts are no exception. Analysts from both sides of the political spectrum have substantiated and arrived at conclusions supporting different levels of taxation. To illustrate, the Center for Budget and Policy Priorities determined the U.S. deficit as a percent of Gross Domestic Product (GDP) would have been 2.6 percent smaller had the Bush tax cuts not been implemented. Yet, to the contrary, in 2007 the Heritage Foundation, claimed the Bush tax cuts did not substantially reduce tax revenues, led to a larger tax burden on the rich and an increased economic growth by more than 100 percent or double that of 2003. ...read more.

Therefore, these jobs are outsourced to area of the world where labour is significantly cheaper. For example, China becomes the world factories, and India becomes the global call centres. This is actually making economic sense for the consumers because no one wants to pay higher price for the same product. So we can see outsource reduce the jobs, and when no new jobs are created to offset the scenario, unemployment grows. As people become unemployed, they have less to spend, thus less spending to stimulate the economy. The economical growth slows down because all these reasons. For example, the family buy clothes for the 3 sons in an economical efficient manner: the eldest son pass his clothes to the second son, and the second son passes his to the third son, and so only the eldest son need to buy clothes. Same here, if the US loses its manufacturing to other countries down the chain, it needs to invent new technologies, and move up higher in the food chain. The US has spent too much money in wars and defence research; the US should channel more funding to the other areas for economic growth. The US used to be known for its invention of cars, telephone, transistor and others. These seem to be yesteryear glory, as a result; the US needs to put in more efforts to keep this tradition of invention. So now, when we see a better picture of the root cause of the stagflation problem that the US is in, the US can deal with it with an intelligent mind. Most importantly, make sure not to start another one (Iran war). Promote new technology so that US stay ahead of others and produce high tech product that everyone needs. Japanese Lexus make top rate cars where many people in the world buy. Canada RIM makes very secure communication product Blackberry that many people in the world buy. US should do the same. ...read more.