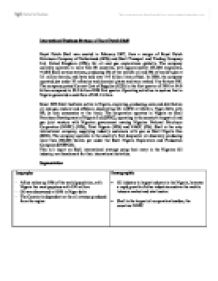 International Business Strategy of Royal Dutch Shell. This is a report on Shell international strategy using their entry in the Nigerian Oil industry, as a benchmark for their international activities.

International Business Strategy of Royal Dutch Shell Royal Dutch Shell was created in February 1907, from a merger of Royal Dutch Petroleum Company of Netherlands (60%) and Shell Transport and Trading Company Ltd, United Kingdom (40%), for oil and gas explorations globally. The company currently operates in more than 90 countries, with approximately 101,000 employees, 44,000 Shell service stations, producing 2% of the world's oil and 3% of world's gas at 3.1 million barrels, and have sold over 145 billion litres of fuel. In 2009, the company operated just under 35 refineries and chemical plants and were ranked 1 by fortune 500. The company posted Current Cost of Supplies (CCS) in the first quarter of 2010 at $4.8 billion compared to $3.0 billion 2009 first quarter. Operating activities in such as that in Nigeria generated a cash flow of $10.4 billion. Since 1936 Shell had been active in Nigeria, exploring, producing, sales and distribution oil and gas onshore and offshore, discovering Oil in1956 at Oloibiri, Niger-Delta with BP, (a sole concession at the time). The corporation operates in Nigeria as Shell Petroleum Development of Nigeria Ltd (SPDC), operating in the country's largest oil and gas joint venture with Nigerian government owning Nigerian National Petroleum Corporation (NNPC) (55%), Total Nigeria (10%) and NAOC (5%). Shell is the only international company, supplying industry customers with gas as Shell Nigeria Gas (SNG). ...read more.

* Increased productions to meet shareholder targets * Investment and other mediums were implemented to increase profitability * Tax and other incentives will help increase profits * Vast oil reserve that will yield profitability * Control of the oil prices. * Backlashes as a result of increase in Oil prices. Conclusion The Economical benefits from operating in these region arte reflected in the increasing profits,. Social Analysis Situation Position Opportunity Threat * Nigeria consist of 36 states and it federal capital territory in Abuja, which are sub-divided into 774 local government areas. * Niger-delta has been plagued by violence as a result of activists operation against Oil corporations and the government * Lack of Jobs, and other social amenities * The execution of the Ogoni 9 activists. * Initially, a Friedman view towards social responsibility * Then release sustainability reports on their positive approach to social responsibilities. * Work towards positively affecting the areas in the operate in. * Philanthropically gestures such as providing amenities, educations and charity work help to build the corporations image. * Unrest and tension in the Niger-Delta drove the prices of oil, which the company benefited from. * Backlash from critics, human right activist and the international community following the execution of the Ogoni 9 Conclusion Although, there have been criticism of Shell approach to social responsibility, the company still benefited from the increase in oil prices, however the backlashes negatively affected the country's brand image, hence the annual report of their positive approach. ...read more.

* Through their approach to social responsibilities in Nigeria, they have diversified towards other philanthropic industries which have positive affected their brand image Makes a significant contribution to the perceived customer benefits of the end product * Upstream production predicted to reach 3.5 million barrels of oil equivalent per day in 2012, reflecting an 11% increase from 2009( Shell report, 2010) * �178.682 billion in revenue, with an income of �8.16 billion in income, with a capital investment of �20.34 billion. * Over �771 million in R&D investments Difficult for competitors to imitate * Technological knowledge leading to development of their "Slimwell" designs * New Patents innovations for cost reduction and improving efficiency and reliability * Strategic Relations on a Global Scale, and worldwide operations. Conclusion The core competences central to Royal Dutch Shell's operations, have resulted in the companies competitive advantage over rivals in the market. Entry Mode Royal Dutch Shell entered the Nigeria Oil market through forming alliance and establishing strategic relationship with the country's government and other oil companies. Whilst standardising the prices of export barrels of oil, in the global market, which aided economies of scale, resulting in increased returns, as observed in their annual/quarterly financial reports. Evaluation Royal Dutch Shell international business strategy has been a proven success as shown in their growth and reflected on their balance sheets, in generate extravagant rewards for the company's share holders, whilst having an a positive approach to social responsibilities. ...read more.