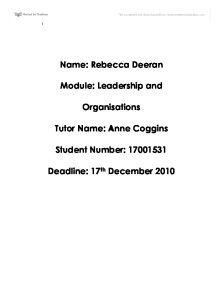 Name: Rebecca Deeran Module: Leadership and Organisations Tutor Name: Anne Coggins Student Number: 17001531 Deadline: 17th December 2010 Assessment 2: Leadership Winston Churchill This report looks critically at leadership styles and the effectiveness of Winston Churchill's leadership and look at how leadership theories were actively demonstrated by Churchill. There are many definitions of leadership that have been derived from studies throughout the years. Daft (2000) stated "leadership is an influence relationship among leaders and followers who intend real changes and outcomes that reflect their shared purpose"i. I feel that for leadership to be effective, a shared purpose and vision needs to be created as demonstrated by Churchill. Churchill inspired and motivated people and rallied them behind the war effort to fight for their country. The vision he created was victory and no surrender in order to achieve a 'Greater' Britain. Winston Churchill was born in 1874 in Oxfordshire, and during his life held a number of senior public appointments, firstly in 1911 when he was First Lord of Admiralty and held this post in the first few months of World War 1 but resigned after being blamed for the disastrous Dardanelles expedition and rejoined the army. In 1924 Churchill was Chancellor of the Exchequer. In 1940 Neville Chamberlain resigned as Prime Minster and Churchill took overii. ...read more.

Churchill was partly an achievement orientated leader (appendix 7) and partly a directive leader. The characteristics of achievement orientated leadership are setting challenging goals for followers, and expecting them to perform to high standards, displaying confidence that followers will perform well, best used when the task is complex and when followers lack sufficient drive. Churchill displays the characteristics within this model in all areas and an example is that he set goals uniting Britain, saving democracy and winning the war which to many seemed impossible. Then I followed this up and looked at the four areas that affect a leader, these being subordinates, outcomes, work environments and the leader (appendix 8). An example of the effect of outcomes on Churchill's leadership was that he managed to secure the support of America in 1941 and Best (2010) stated "without whose material help - and better, military alliance - Britain, he well understood, had no chance of winning"vii. I feel that Churchill was a directive leader when comparing him to the directive leadership model (House 1971) as he possessed all of the required characteristics, in particular his ability to speak effectively, which can be shown through a quote from Ignatius J Reilly "It may not be an exaggeration to say that in 1940, Winston Churchill saved the world, and instrumental in doing that were the incredible power of his speeches"viii, this clearly supports the notion of Churchill being an effective speaker. ...read more.

Churchill throughout his life displayed this leadership, he showed the characteristics within the model. Whilst he was Prime Minster he showed personal humility by channelling his ambition to over come Nazi Germany and demonstrated to the whole country that he would do whatever was necessary to win the war. Overall I would state that leadership styles vary according to various situations. I feel effective leadership is a process where leaders uses their leadership skills to influence followers and in return achieves the set goal/s. After looking at all the models and applying these to Winston Churchill's leadership style it is clear that the reason why he was so effective was because he demonstrated traits such as communicating, self confidence, confidence to others etc. These traits contributed to his effectiveness. I believe that Churchill did all that he could to express himself. Warren Bennis (1998) summed this up as "leaders know what they want, why they want it, how to communicate what they want to others in order to gain cooperation and support"xvii. This is what Churchill did during a period of crisis. What would have happened if Churchill had not shared social identity with his followers, would he have been a leader that no-one spoke about today? If you delegate leadership then this clearly means you are progressively relinquishing the role of leader. Churchill clearly demonstrated that leadership is the one job which a leader cannot delegate. ...read more.