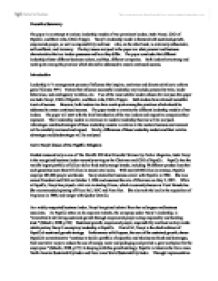 Executive Summary The paper is an attempt to analyse leadership models of two prominent leaders, Indra Nooyi, CEO of PepsiCo, and Steve Jobs, CEO of Apple. Nooyi's leadership model is featured with sustained growth, empowered people, as well as responsibility and trust. Jobs, on the other hand, is extremely enthusiastic, self-confident, and visionary. The key issues analysed in the paper are what personal and business characteristics the two leaders possesses and how they differ. The paper concludes that different leaderships foster different business culture, and thus, different companies. Both leaders have strong and weak spots among the practices which should be addressed to ensure continued success. Introduction Leadership is "a management process of influence that inspires, motivates and directs activities to achieve goals."(Course PPT) Factors that influence successful leadership may include personality traits, leader behaviours, and contingency variables, etc. Two of the most notable leaders chosen for analyses this paper are Indra Nooyi, CEO of PepsiCo, and Steve Jobs, CEO of Apple. Both leaders have attained incredible levels of success. However, both leaders also have weak spots among the practices which should be addressed to ensure continued success. The paper tends to examine the different leadership models of two leaders. The paper will start with the brief introduction of the two leaders and respective companies they represent. Their leadership models in relevance to modern leadership theories will be analysed. Advantages and disadvantaged of these leadership models in relation to the modern business environment will be carefully reviewed and argued. Finally, differences of these leadership models and their relative advantages and disadvantages will be analysed. Indra Nooyi: Queen of the PepsiCo Kingdom Ranked consecutively as one of The World's 100 Most Powerful Women by Forbes Magazine, Indra Nooyi is the recognized business leader currently serving as the Chairman and CEO of PepsiCo. PepsiCo has the world's largest portfolio of billion-dollar food and beverage brands, including 19 different product lines that each generates more than $1 billion in annual retail sales. ...read more.

There is another feature of leadership within Jobs' personality. Jobs is egoistic towards himself, but he is also egoistic towards his workers in making them achieve what seemed to be unachievable before. It is essential that this egotist feature has also become an integral part of Jobs's success. Additionally, he always believed into the need of his performance for his company and for the consumers. His self-confidence led him to the unprecedented success today. As a visionary leader, Jobs is able to direct his people and make them do things which they have never done before. He is always demanding both towards himself and towards his employees. His deadlines often seem impossible to meet, but he is constantly moving, moving towards improvement in all aspects of his work. These things are essential for the realization of Jobs's vision and plans. As he said in a speech, "There's an old Wayne Gretzky quote that I love. 'I skate to where the puck is going to be, not where it has been.' And we've always tried to do that at Apple. Since the very very beginning. And we always will."(Jobs 2000, p.7 ) Steve Jobs is the first person who brought digital technology to the masses for entertainment purposes. As a visionary, he saw that computers could be much more than productivity tools. Instead, they could be entertainment tools help unleash human creativity and enjoyment. Though Jobs is said to a perfectionist, Jobs' leadership is far from perfect. The legendary success of Apple in recent years is primarily due to Jobs' unique leadership based on his personality. His personal achievement as a world business leader by no means is an unprecedented success. However, the disadvantage of this leadership model is that its uniqueness can hardly be inherited or imitated when Jobs retires in the near future. Critical Analysis of Leadership Models One of major differences between leadership styles of Nooyi and Jobs is that Nooyi tends to be more relationship-oriented while Jobs tends to be more task-orientated. ...read more.

On the other hand, Indra Nooyi has served as a model not only for PepsiCo employees, but also for Indians and women across the globe. Nooyi's daily interactions display genuine respect towards everyone. Moreover, this leader has excelled by establishing goals and standards of excellence. Every year Nooyi has established objectives that have been a clear but achievable stretch. Those objectives have been established in every division and at every level. Employees look at the objectives and commit to them. "Our belief is that once you spend enough time in the design of those objectives up front and you unleash the corporation's entrepreneurial spirit and create an environment for them to work, they can meet those objectives." (Murray 2004, p.16) Overall employees that have not met the objectives tended to flag themselves and then established a new growth agenda. "The objectives are not just numerical objectives. They also relate to people or creating an environment or meeting certain diversity goals. That is really how we judge whether people are making progress in the organization." (Murray 2004, p.17) Nooyi's personal examples and values have led employees to establish individual commitment to PepsiCo. Nooyi has become a prime example which employees can model after. Conclusion In a conclusion, different leaderships foster different business culture, and thus, different companies. Nooyi's leadership model is featured with sustained growth, empowered people, responsibility and trust. Jobs, on the other hand, is extremely enthusiastic, self-confident, and visionary. One of major differences between leadership styles of Nooyi and Jobs is that Nooyi tends to be more relationship-oriented while Jobs tends to be more task-orientated. Second, as visionary leaders, Nooyi tries to build the vision shared with her employees while Jobs tends to build the vision on his own. Third, Jobs differs from Nooyi by the way they establish principles concerning how people should be treated and what methods should be used to attain goals. Both leaders have attained incredible levels of success which may be attributed to strengths among the practices. However, both leaders also have weak spots among the practices which should be addressed to ensure continued success. ...read more.